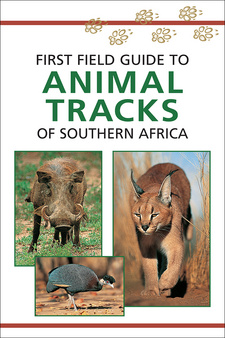 The ability of Kalahari Bushmen trackers to interpret and understand the story behind each spoor is cultivated over a lifetime and developed to an exceptionally high degree. Men and women are able to identify the footprints of an individual person. They can identify the antelope they have shot from the rest of the herd, and have the ability to track down that specific animal. In the First Field Guide to Animal Tracks of Southern Africa, Louis Liebenberg teaches the basics skills of tracking animal spoors.

The art of tracking involves each and every sign of an animal's presence that can be found in nature, including ground spoor, vegetation spoor, scent, feeding signs, urine, faeces, saliva, pellets, territorial signs, paths and shelters, vocal and other auditory signs, incidental signs and skeletal remains. Footprints provide the most detailed information on the identity, movements and activities of animals. The spoor illustrations in this book are exact studies made under ideal conditions - in other words, spoor that are clearly visible in mud or sand, and are not distorted. In reality, one will probably never find two animals with identical footprints. One advantage of using ideal footprints is that it gives one a preconceived image, which makes it easier to identify imperfect tracks correctly, in conditions where the tracks may otherwise have been overlooked. Preconceived images play an important role in the recognition of patterns in nature. The 'danger' with them, however, is that one may misread random markings as spoor or one animal's spoor for another. One must therefore be careful not to be prejudiced and see what one would like to see. The clearest footprints are usually found in damp, slightly muddy earth, in wet sand, in a thin layer of loose dust on firm substrate, or in snow. Dirt roads and paths may have a thin layer of very fine dust on firm ground that can reveal the finest detail of the spoor. Usually, however, footprints are partially obliterated, and one should walk up and down the trail to find the best imprints. Even if no clear footprints can be found, one can collect bits of information by studying several footprints and piecing them together for an image of the complete spoor. Keep in mind that footprints may be distorted owing to slipping and twisting of the feet on the ground. When an animal is walking or running on a slope, the feet may slip, so the spoor will appear elongated or warped. When trotting or running, the animal's mass is supported mainly on the toes and only part of the intermediate padsG may show, or, in the case of mongooses, the proximal padsG may not show at all. On hard ground padded toes may not show and only claw marks may be seen. If the spoor could be that of several possible species, the distribution maps should be consulted to eliminate those that do not occur in that locality. Habitat and habits, such as sociability and daily rhythm, as well as feeding signs and faeces, should also be considered to narrow down the range of possibilities. Spoor identification requires not only a great deal of knowledge, but also skill and experience. Although the inexperienced naturalist should be able to use this book to identify near-perfect spoor in ideal conditions, the accurate identification of imperfect spoor, especially in loose sand, may only be possible after considerable experience. [...]

This is an excerpt from the First Field Guide to Animal Tracks of Southern Africa, by Louis Liebenberg.

This First Field Guide helps interpreting animal tracks to indentify the Southern African animals that have passed through an area.