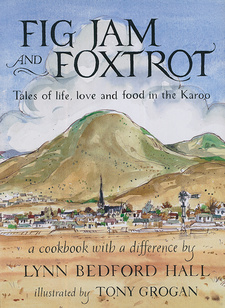 Illustrations from the cookbook 'Fig Jam and Foxtrot', by Lynn Bedford Hall.

"While everything else is utterly fictional, the perfume of the Karoo earth and the simply magnificent international recipes, which cluster around each of the women’s different cooking backgrounds, is absolutely true. It’s divine!", Jenny Crwys-Williams from Food & Home Entertaining writes.

And Lynn Bedford Hall introduces: Once upon a time I used to climb the oak tree in our garden and talk to the creatures that lived in the knot-holes in the branches. I knew they were there, I just had to whisper softly for them to hear me. They were my friends and through them I discovered the magical world of make-believe. I couldn’t set down these conversations because I couldn’t write at that age, but this internal world has never left me. We all have a desire to create and as I grew older my need found expression in two spheres: writing and cooking. I think I was eleven when I had my first poem published. It went something like this: ‘My classroom is in such a lovely school, where trees are shady and leafy and cool.’ I’ll spare you the rest. At about the same time I started messing around in the kitchen. My best invention was a milkshake made with condensed milk and ginger ale. Now all this sounds quite horrifying, but everything improved as I grew up, and this is where these stories come into play. The small Karoo town about which I write exists, but I have altered the name because that allows me more licence. Like all towns, it has changed over the years, but at that time it was simply the happiest place for a child to be, offering glorious freedom in a sheltered world of gentle people. As I remember it, the days were hot and still but for the soft strumming of cicadas; the sunsets were unfailingly brilliant and the night sky as bright as an eternal Christmas tree. I also remember the women: in my child’s mind they were always plump and powdered and smelling of eau-de-cologne. They sat me on their laps and gave me slivers of biltong. Aspects of my home life that probably helped to shape me were my parents’ love of books, music and good food. They were a prominent couple in the community. We knew all the inhabitants of the town and district, and I was taught to respect everyone and never, ever to repeat any secrets or gossip. I must, therefore, have become a voyeur at an early age and locked a thousand secrets in my head, for there were scandals aplenty - adulterous affairs and deliciously wicked going-ons - all to be tucked in deep and not spoken about. And yet, despite the odd bit of scandal, it was a town and district in which lived truly kind and noble people, and the true essence of the place is still as real to me as it ever was. Food plays a big part in small towns. Whether it’s a bazaar or a sports meeting, a wedding or a funeral, people eat when they meet. And with no take-aways, home cooking was very important. Women became quite famous for their personal specialities, and you never went visiting without a little gift in a basket. My mother (who loved good food) did not enjoy cooking - we had an excellent cook who took care of that side of things. But her sister, my aunt, who lived on a large farm outside the town, was an adventurous cook with the most wonderful ingredients at hand. So this was the perfect combination - at home I was allowed to occupy the kitchen as much as I liked, and on the farm I could learn from my dear, patient aunt. Now put all these factors together and perhaps the reason for this book will become clear. In these women of Corriebush, I have been able to interpret my life in a country town, indulge my compulsion to write, and incorporate my career as an author and food and travel journalist. Although the women are fictitious, I have attributed the recipes to them, firstly imagining what they might have cooked and then updating the recipes to suit today’s tastes. They have been devised, tried and tested by me, and the result is a book in which fact and fiction are combined to create a cookbook with a difference. I hope it will be an enjoyable read, with some useful recipes, but as Sophia would say,

‘Remember, liefie, the proof is in the trifle.’
‘Pudding, Sophia.’
‘I said pudding.’

Panna cottas are delicate ‘cooked cream’ desserts, usually made with sweetened double cream, flavoured with vanilla, and softly set with just a flurry of gelatine. Once chilled and unmoulded, they look just like wobbly little blancmanges, but they’re much richer and because of this, a trend - outside of Italy - is to scale down the fat with the addition of milk, which of course requires extra gelatine, which could result in a rubbery wobble, which is, as Lynn Bedford Hall lines out, all wrong. An attractive solution is to set the panna cottas in small coffee cups. Then, instead of unmoulding them, you simply place the cups on their saucers, with small spoons alongside. In this way it is still possible to use a proportion of milk without extra gelatine. This is an unusual presentation, but these little Amarula creams provide a seriously delicious ending to a fine dinner when something sweet - but small - would be just right.

Sprinkle the gelatine over the liqueur and leave to sponge. Mix the cream, milk and sugar in a heavy saucepan and slowly bring to just below boiling point. Remove from the stove; briskly stir in the sponged gelatine and give it a quick whisk to make sure it’s dissolved. Add the vanilla, pour into a jug and cool, stirring occasionally. Pour into six small coffee cups and refrigerate for a few hours until softly set. Just before serving, mix the cocoa and icing sugar in a small sieve and sift just a whisper over the top of each - this is just to add a little colour to the pale cream. Serves 6.

This is an extract from the book: Fig Jam and Foxtrot, by Lynn Bedford Hall.

Fig Jam and Foxtrot is a cookbook with delicious recipes and heartgoing Karoo stories.

Return to Corriebush was the Gourmand World Cookbook Award Winner in the category Best Cookbook.