Field Guide to the Cradle of Humankind, by Lee Berger and Brett Hilton-Barber 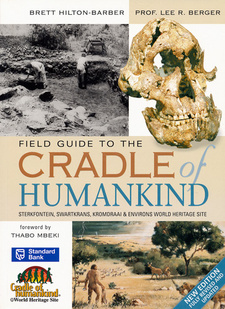 When Professor Dr. Lee R. Berger and Brett Hilton-Barber introduced The Field Guide to the Cradle of Humankind caused a considerable stir among professionals in the field of palaeoanthropology and sparked a flurry of newspaper articles, journal articles and general debate.

Lying about 40 kilometres from the centre of Africa's economic powerhouse is a stretch of highveld grassland and mixed woodland that has caught the imagination of the world. This seemingly unremarkable area has been awarded the highest conservation status of World Heritage Site by UNESCO, and as such will forever be designated as belonging to all the people of our planet. The Sterkfontein and Environs World Heritage Site is an area of about 48 000 hectares in extent. It is not blessed with large rivers, vast monuments or mountain ranges. Luckily, it is still in an almost pristine state, yet to the uninformed it can be an entirely forgettable area through which small streams run between shrubby banks. Plant diversity is high and so too are the number of bird species, particularly in summer. But the reason for the site's special status lies not in its external beauty, but rather beneath the ground - in the dolomites. The Sterkfontein site overlies a vast mass of ancient limestone that formed when the Earth was half as old as it is today. At the surface of the dolomites, caves emerged, and associated with these caves are some of the world's richest fossil deposits. Bones of ancient animals attest to a time when the Earth was fundamentally different. These fossil riches also contain the gems for which all palaeontologists search - the rarest of the rare - the bones of our earliest ancestors. In all likelihood no objects in the world have stimulated as much scientific argument and resultant discourses as the fossilized remains of Africa's early hominids. South African fossils have contributed hugely to the vast scientific database that has accumulated. But until now very little information has been available to the general public. This book seeks to fill that void. The revised edition of the Field Guide to the Cradle of Humankind is a remarkably concise and informative book that seeks to inform readers about the unique biological and geological wealth of the area. It is an ambitious guide because it aims to educate the interested layman about perhaps the most fractured and fractious science of all - the story of our own lineage and pedigree. Paleoanthropology (the study of ancient mankind) is a fluid science because so few fossils have been found and each new find often brings with it a new theory as our family tree grows bushier and bushier. Indeed the world's richest site for ancient hominids is Sterkfontein, which, through the work of our eminent scientists, has contributed vastly to contemporary theories about our own evolution. The fact that they still remain theories renders this book all the more fascinating. It is also this book's biggest weakness, as theories can change and are obviously totally subjective. It is therefore inevitable that often valid criticisms are aimed at an attempt such as this to explain our origins to the layperson. New editions will differ fundamentally from earlier ones as the authors respond to emerging information and new discoveries. This new edition seeks not only to respond to the market need for such a book, but also to address the criticisms levelled at the first edition. It incorporates new information and contemporary hypotheses on hominid evolution. While not seeking to please everyone, the book has evolved into a concise and accurate publication, which will guide thousands of visitors through one of the most fascinating corners of our beautiful country.

This is an excerpt from the book: Field Guide to the Cradle of Humankind, by Lee Berger and Brett Hilton-Barber.

Field Guide to the Cradle of Humankind

This Field Guide to the Cradle of Humankind caused a considerable stir among professionals in the field of palaeoanthropology and sparked a flurry of newspaper articles, journal articles and general debate.

A Guide to Sterkfontein and the Cradle of Humankind

This most interesting guide introduces the palaeo-anthropological sites of Sterkfontein and Gladysvale in South Africa as cradle of humankind.