Field Guide to Acacias of East Africa, by Najma Dharani 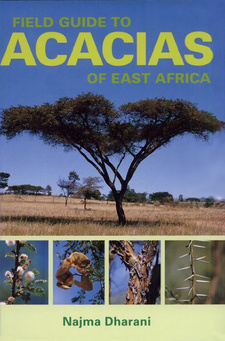 Photos from the Field Guide to Acacias of East Africa, by Najma Dharani.

Introduction by, Najma Dharani: East Africa, a region embracing Kenya, Uganda and Tanzania, is one of the richest areas of the African continent in terms of its flora and fauna. This natural wealth is, to a very large extent, a product of the region's enormous diversity of habitat and climate. East African ecosystems comprise various vegetation zones, including shrub savanna and wooded savanna, grassland, woodland, forest, bushland, desert, semi-desert, swamps and mangroves. Acacia species are prominent and integral features of East Africa, mainly of the hot, arid and semi-arid savanna of this region.

They are largely restricted to the lowlands, usually below 1000 m, but may be found at heights of up to 2100 m. A few species occur in montane or wet forest, or upland habitats. Several members are riparian in their distribution, located on river banks, alluvial terraces, lake margins and swamps, while a few can be found in coastal areas at sea level. The genus Acacia is the largest group of woody trees and shrubs in the subfamily Mimosoideae of the family Leguminosae (or bean family), and the second-largest in the family. These trees are among most widespread plants in tropical and subtropical Africa and are also distributed in the southern USA, Central and South America, Arabia, India, eastern Asia and southwards to Australasia. The name Acacia is derived from the Greek akis, meaning 'barb' or 'sharp point'. Current opinion recognizes up to 1 342 described species: 954 in Australia, 230 in America, 132 in Africa, 18 in Asia, and some island endemics. The 132 African species are largely restricted to the dry savanna and semi-desert scrub habitats of eastern and north-eastern Africa, stretching from southern Tanzania northwards to Somalia, Ethiopia and Eritrea. East Africa has 62 species, of which eight are endemic to Tanzania and four to Kenya. Acacias have adapted to their environments in various ways, some species are wide-spread and have the ability to grow under diverse environmental conditions and to occupy a range of habitats, e.g. A. polyacantha, which can grow on river banks, at the edges of marshes, or on dry, stony hillsides. Others, such as A. reficiens, which occurs only in areas of dry scrub, have more specific requirements and are confined to restricted geographical areas and ecological conditions. Since East African savannas are hot and dry, acacias need to retain as much moisture as possible. They do this by dividing their leaves into several tiny leaflets, which are arranged horizontally to capture sunlight, or vertically to reduce transpiration. Many acacias have umbrella-shaped canopies (e.g. A. tortilis, A. abyssinica, and A. lahai) and have tiny leaves to capture the maximum amount of sunlight. Some species, like A. tortilis and A. gerrardii, have deep tap root systems, which allow these plants to survive in semi-arid areas, as their roots reach deep into the water table. Others have shallow, but very extensive, root systems that allow them to tap into limited water. Other Acacias that grow in areas where the water table is close to the surface, mostly along lake fringes, in marshy areas and on poorly drained soils, have a shallow root system, which protects the tree from becoming water-logged, e.g. A. xanthophloea. Because they provide sustenance to so many creatures, it is no surprise that acacias have evolved some of the most effective and cunning defences in the plant kingdom. These defences are their thorns or armatures - hence they are often referred to as the 'thorn trees of Africa'. Acacia thorns may be straight, hooked or a mixture of both, depending upon the species. The armatures protect the acacia trees from the large animals that browse on them. These thorns are said to have evolved as defence mechanisms against the large herbivores, but one only has to observe a giraffe, an elephant or gerenuk browsing on these trees to realize such defences can hardly be completely efficient. [...]

This is an extract from the book: Field Guide to Acacias of East Africa, Najma Dharani

This unique field guide to Acacias of East Africa introduces all 62 of the Acacia tree species occurring in the East African region.

This is the fully revised third edition (2019) of the field guide to common trees & shrubs of East Africa.

Field guide to common trees and shrubs of East Africa

This is the 2nd (older) edition of Field guide to common trees and shrubs of East Africa. It is here sold at a reduced price.