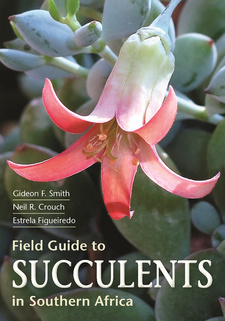 The Field Guide to Succulents in Southern Africa, by Gideon F. Smith, Neil R. Crouch and Estrela Figueiredo, is more than just an ID guide for plant lovers, it will inspire gardeners who are turning to indigenous, low-maintenance and waterwise plants for cultivation.

Much of southern Africa is semi-arid to arid, indeed desert-like, and it is perhaps not surprising that succulents abound in the region. Somewhat predictably, therefore, southern Africa can also lay claim to having the richest and most diverse succulent flora in the world. Although this has been known for many years, the extent and diversity of this flora was only recently verified by a comprehensive survey: the results revealed that an amazing 47% of the world's known succulents occur in southern Africa. Succulents come in all shapes and sizes.This diversity ranges from succulent forest, savanna, and desert trees of over 20m tall, such as the African baobabs (Adansonia digitata and Adansonia kilima) and theTree aloe (Aloidendron barberae), to miniature soil-huggers (various species of Anacampseros, Avonia, Bulbine, Haworthia and mesembs, for example) standing only millimetres high. Some of these capably mimic their pebble-desert surroundings. One thing they all have in common is the ability to store water in one or more of their organs for later, slow release. Whereas plants in moist regions absorb water and soon thereafter release it through their leaves, succulents have developed a range of mechanisms that allow them to accumulate moisture when it is available, and thereby sustain plant growth when they are water-deprived. To help readers identify the families of succulent plants we have included an introductory section that gives brief summaries of the most obvious and easily recognisable characters of, in particular, the succulent representatives of the families. Plants are arranged according to the families in which they are classified. The succulent plant fraternity has become familiar with these families, and paging through the family treatments will enable you to form a mental picture of what the succulents and, in many cases, their relatives look like. Introductory pages to each of the 47 succulent families covered give some basic information about the families, and illustrate typical representatives as well as some of their characteristic features. In some cases, the habitats that host family representatives are also illustrated. In many cases, non-succulent members of the succulent plant families are illustrated to give an idea of other species that are related to the succulent taxa treated. Non-southern African representatives are also portrayed, to better reveal how they relate to the global flora.The family introductions are followed by the species, arranged alphabetically by genus and then species, and infraspecific taxa when appropriate. Over the past few years a better understanding of the relationships among plants has resulted in new, sometimes surprising, rearrangements among succulents. While well-known families and genera have to some extent been retained, in some instances it has become useful to adopt recent family and genus concepts. Providing a single, all-encompassing definition for 'succulence' in plants is not as simple as it may seem. Many plants that display succulence of one form or another show enormous variation in succulent attributes, as well as the degree to which the succulence is expressed. Not all leaf succulents, for example, have plump, heavy leaves filled with accumulated moisture: some actually have leaves that appear quite thin and flat. We here regard succulents as plants that accumulate and store water in their tissues to survive periods of drought in the active, growing phase. [...]

This is an excerpt from Field Guide to Succulents in Southern Africa, by Gideon F. Smith, Neil R. Crouch and Estrela Figueiredo.