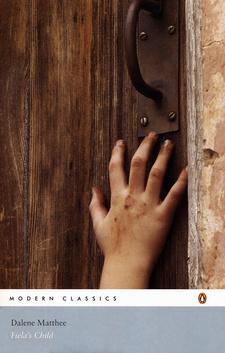 Dalene Matthee (1938–2005) was known for her four Forest Novels, written in and around the Knysna Forest. Fiela's child belongs to this famous series.

The day the child disappeared, the fog came up early and by midday it seemed as if the Forest was covered in a thick white cloud. Elias van Rooyen put down his axe and went to sit in the shed on the pile of yellowwood beams that had already been finished. It was no good working when the fog was that thick - the wood got damp and would not yield to the axe. And besides, he did not believe in a man working himself to death, as the woodcutters did. He believed in a good plan and a bit of luck, although luck was rare in the Forest. 'Barta!' he called towards the house, 'bring me some coffee, I'm done for!' The fog was really thick. He could only just make out the house from the shed; just enough to see that he would have to fix the roof before the coming winter, before the whole lot collapsed on top of them. Somehow he would have to get hold of a few second-hand sheets of corrugated iron. The winter before Barta had kept on moaning about the children sniffing and coughing because of the damp in the wooden house. Of the four families that had built houses on Barnard's Island, he was the only one who was not a woodcutter. And he was the only one that earned real money instead of having to barter for everything with the two wood-buyers in the village. Not that he thought himself much better off than the woodcutters for the money he made from the beams he cut was only just enough to live on if he trapped the meat for his pot himself. But making beams was far easier than cutting wood and it also meant that you could sleep in your own bed every night instead of in a shack somewhere in the Forest. When he heard Barta coming with the coffee, he quickly grabbed the hatchet and examined the handle so as to look busy. Barta could never understand that you sometimes had to sit down quietly in order to think properly. 'Elias, isn't Lukas with you?' she asked, standing at the open end of the shed with the coffee and looking worried. 'No. You can put the coffee down on the block there, I've got my hands full.' She was still good-looking, he thought to himself as she walked slowly away - she would have to get some shoes. Perhaps he should get Krisjan Small's eldest boy from Lily Valley Bush to come and help him at the beams so that he could produce more. Krisjan's boy was used to working for coffee and sugar and meal and might as well earn them from him. On the other hand it meant putting him up and the house was too small as it was. The children were getting big and before long he would have to get some planks and add a third room. Krisjan's boy could not walk from Lily Valley Bush every day - he would only get to work at sun down. He started thinking further ahead; the only way a man could make himself a decent bit of extra in the Forest was to buy a gun and shoot elephants. Bigfeet. For the tusks. But how did you find money for a gun, powder and shot? [...]

This is an excerpt from the novel Fiela's child, by Dalene Matthee.

The novel Fiela's child is a powerful creation of time and place with dark threads of destiny and oppression.

Circles in a forest

The South African novel 'Circles in a forest' grabs you to such an extent that you will never drive past Knysna again without thinking about these people and how they suffered.