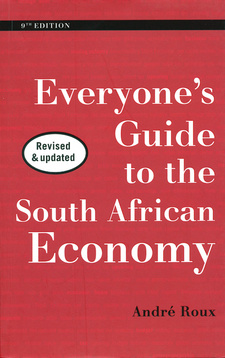 André Roux's Everyone’s Guide to the South African Economy, in it's 9th edition, is essential reading for every South African consumer and taxpayer.

There are thousands of books on economics. Most of them are written as university textbooks and, as such, are of a somewhat theoretical and technical nature - and rightly so. But it is not only university students who want to learn about economics. Each and every one of us needs to understand the nature of the economic forces that often dictate the course of our lives. The South African economic landscape has changed profoundly since this book first appeared some 15 years ago. Then, full democratisation of the country was only a vague possibility; South Africa was effectively isolated by the major world economies; and unemployment was a niggling - but not major - concern. It is therefore fitting that this book should be restructured and modified to take account of some of the new realities and imperatives that have emerged during the last decade. Despite these changes, the underlying purpose of the book, as described in the first edition, remains unchanged: to explain in relatively simple terms some of the important economic factors and relationships confronting us every day. Financial data and statistics are constantly changing and are subject to both the national and the international economic situation. While every care has been taken to ensure the accuracy of the material contained herein at the time of publication, neither the author nor the publisher bears the responsibility for any changes that may be instituted in the future.

This is an excerpt from the book: Everyone’s Guide to the South African Economy. 9th edition, by André Roux.

The 10th edition of Everyone’s Guide to the South African Economy explains the economic forces that subtly dictate the day-to-day existence of ordinary people.

Making Money out of Property in South Africa

This is a clear, well-written and factual perspective on the South African property market