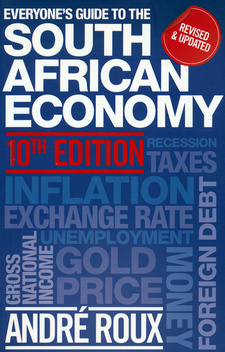 André Roux's landmark 10th edition of Everyone’s Guide to the South African Economy investigates the causes and consequences of the 2008/2009 global financial and economic crisis, looks in more detail at the sub-Saharan African economy, and explores human development issues in South Africa and their implications for policy-making.

The global and South African economic landscape has changed profoundly since this book first appeared 20 years ago. At an international level, the process of globalisation has taken root and changed many of the 'rules of the game'. Countries such as China and India have benefited tremendously from global economic integration, and have become major economic powerhouses. And then, just when we started thinking that economic growth was guaranteed forever, the 'bubble' burst two years ago, heralding the most severe and widespread recession in almost eight decades. This may again change the way we think about economic affairs. Twenty years ago, the full démocratisation of South Africa was but a vague possibility as the economy wrestled with the reality of sustained isolation and domestic stagnation. The consequent normalisation of society and reintegration into the world economy have helped to create a generally much-improved macro-economic environment, although there are still many concerns and policy challenges - not least of which is a disturbingly high unemployment rate. And poverty rates in South Africa remain stubbornly high, while income inequality persists. A further example of how things economic change rapidly is reflected in the fact that, whereas five years ago many South Africans were belittling the 'weak' rand exchange rate, today (mid-2010) there is a growing sense in many people's minds that the rand is 'too strong'. Despite (or perhaps because of) these and many other changes, the underlying purpose of this book, as set out in the first edition, remains unchanged: to explain in relatively simple terms some of the important economic concepts, factors and relationships confronting us every day. The indicators discussed in this book describe the economic backdrop that ultimately affects corporate earnings, interest rates, inflation, the future cost of owning a car, the security of our jobs, and a multitude of other realities that we have to deal with on a daily basis. While the overall style of the previous nine editions of this book has been emulated in this, the tenth revised and updated edition, the chapter sequence has been changed to enhance the ease of reading. Moreover, a new, separate chapter on Africa has been included in recognition of the growing importance of the continent for South Africa. In addition, the chapter on the international economy includes a discussion of the 2008/2009 'Great Recession' and its aftermath. Tinally, while every care has been taken to ensure the accuracy of the material contained herein at the time of publication, neither the author nor the publisher bears the responsibility for any changes that may occur in the future.

This is an excerpt from the book: Everyone’s Guide to the South African Economy. 10th edition, by André Roux.

The 10th edition of Everyone’s Guide to the South African Economy explains the economic forces that subtly dictate the day-to-day existence of ordinary people.