Eish, but is it English?, by Rajend Mesthrie and Jeanne Hromni 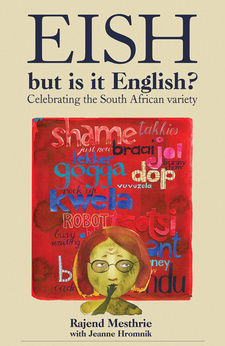 Eish, but is it English? is a book for everyone who is interested in the way South Africans use language and make it their own. Rajend Mesthrie and Jeanne Hromnik consider the social implications of language, questions notions of correctness and incorrectness, and celebrate South African English for its innovations and expressiveness.

How this book came about

(...) Down south (like our friends in Australia), we speak English a little differently. This depends, too, on which part of the 'we' we belong to. The main inspiration for this book came, however, from John Orr's popular South African radio programme Word of Mouth, which attracts the earnest ('Is it correct to say ...?'), the angry ('Last night I heard a television announcer say ...') and the broad-minded ('It doesn't matter how people speak so long as you can understand them ...'). I am a devoted follower of Word of Mouth. In fact, I know many of the answers already - especially the easy things, like the difference between 'which' and 'that', or whether you use the plural or singular form of the verb after nouns like 'group' and 'team' and 'committee'. Of greater interest to me are more difficult questions, such as: 'What is distinctive about South African English?' or 'Can there be many grammars?' or 'What group of South Africans are you talking about?' And, by the way, where on earth does 'bunny chow' come from? On the basis of Word of Mouth, I decided that my personal candidate for sainthood was South African language guru Rajend Mesthrie, who often features on the programme. He knows a lot of the answets, and when he published his recent book World Englishes (in 2008) with Rakesh M. Bhatt, I knew he was the man to tell me about the English or Englishes that South Africans speak, where they come from and how they fit into the world spectrum of English. To my surprise - he is a busy man - he agreed and, having given his word, did not go back on it, insisting only on certain conditions. The first of these was that we would not start before the beginning of the following year (2009). We arranged that I would interview him at two-week intervals over two or three months. It seemed like an easy way of writing a popular book on South African English. Raj (if I may) would speak and I would listen and then transcribe his words. And that is what we did. He sat and spoke to the microphone and to the windows and the walls and, occasionally, to his recently operated-on left knee. I sat and listened and popped in the occasional question. It was enough to make anyone self-conscious, but he survived and that, after all, was one of the points of this book: how self-conscious are we when we speak? Better put: what register do we (consciously or unconsciously) choose to suit a particular occasion? It wasn't quite as easy as anticipated. Session One came out as a series of clicks and pauses, although the manufacturers of my recording device, made in China, promised 'wonderful comfort' along with 'perfect sound effect, extreme stability and smart feature which make it the handicraft of master level'. Raj was forgiving of the waste of his time. He is acutely aware of the perversity of recording equipment, having spent much time interviewing the surviving basilectal (very broad) and mesolectal (medium broad) speakers of South African Indian English, as well as speakers of other varieties of English. Then there was the question of writing out a spoken text. The difference between spoken and written English is an intriguing one. (...)

This is an excerpt from the book: Eish, but is it English?, by Rajend Mesthrie and Jeanne Hromni.

Eish, but is it English? Celebrating the South African variety

Eish, but is it English? explores the influence of Afrikaans, Zulu, Xhosa and other languages on English as it is spoken in South Africa.

Language and democratisation in the SADC Region