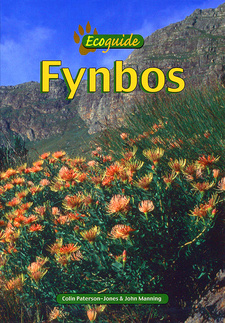 A travel adviser at the back of John Manning's and Colin Patterson-Jones's Ecoguide Fynbos provides information on National Parks, nature reserves and other prime flower viewing destinations in the area, with contact details and recommended routes, to enable visitors to make the most of their visit to the area.

The Cape's mountains - or to give them their proper name, the Cape Fold Mountains - lie at the southern tip of Africa as ranges paralleling the western and southern Cape coastlines. These ranges, together with the valleys between, and the plains reaching from their feet to the sea, cover only a relatively tiny part of the whole continent. So distinct is their natural vegetation, though, that it has long been recognised as one of the world's six Floral Kingdoms - the Cape Floral Kingdom. The over 9 000 different plant species growing naturally in this small area make up the Cape Flora, and nearly 70 per cent of them are found nowhere else in the world. This area is now generally called the Cape Floral Region. The way these mountains break up the landscape, and the types of rocks that form their backbones, have played a major role in the evolution of this unique assemblage of plants. The rocks that give the Cape mountains their rugged character are sandstones and quartzites, both of them part of a series of rock formations originally laid down as sediments under a vast sea that once covered this part of the ancient world. The first of the sediments gave rise to the Table Mountain series of sandstones, the rocks that are so now so obvious on the high slopes of most of the Cape mountains. A second lot of sediments produced the much softer Bokkeveld shales that make up the low slopes and valleys, where they have been exposed after millions of years of erosion. The last sediments formed the erosion-resistant Witteberg quartzites, in some places now exposed on the crest of some mountain ranges, like the Witteberg mountains themselves. Near Cape Town, and in the Swartland further north, another, even more ancient type of shale has been exposed - Malmesbury shale - which forms the gently rolling landscape of what is now largely vvheatland. Almost as old are the outcrops of Cape granite that characterise the Cape West coast all the way from the Peninsula to St Helena Bay. Far more recent geological formations are the low limestone hills along parts of the west and southern coastlines, as well as the windblown sand covering the coastal plains. There would not be any mountains here were it not for the cataclysmic events that followed the laying down of the sediments which formed the Table Mountain Group of sandstones, shales and quartzites between 450 and 340 million years ago. At this time, the continent of Africa did not exist. What is now the Cape was not at the tip of any continent, but just an undifferentiated part somewhere in the middle of the ancient super-continent, Gondwana. From about 280 million years ago, immense forces buckled and broke the earth's crust here along fault lines which were later to mark the coastline of the Cape, as Gondwana began to fragment into the southern hemisphere continents with which we are familiar today. Unimaginably immense forces over aeons inexorably compressed and pushed up kilometres-thick slabs of rock until they buckled or broke. In the process, the Cape mountains were born. Over the ages that followed, these were eroded to form the landscapes we see here today. The folding of the sedimentary rocks of the Cape is spectacularly shown in the rock strata of many of the Cape mountains and easily seen on the northern side of the Swartberg Pass and in Sewe Week's Poort near kadismith, as well as in Cogman's Kloof near Montagu. [...]

This is an excerpt from the Ecoguide Fynbos, by John Manning and Colin Paterson-Jones.

Spectacular introduction to the fascinating protea family in southern Africa.

The Cape Floral Kingdom features the rich and unique world of wild flowers of South Africa.