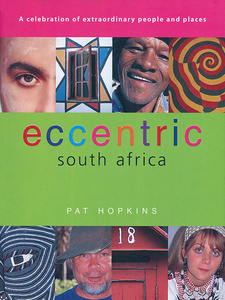 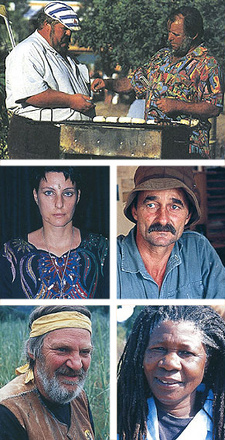 Pat Hopkins's Eccentric South Africa is a celebration of the weird and wonderful people and places in our country. It features the wandering Outa Lappies Schoeman. spiritual artists Noria Mabasa and Jackson Hlungwane, alternative Afrikaners Koos Kombuis and Nataniel. There are interviews with ghost-hunters, a white sangoma, and a man who lives in a shoe. The book showcases curious pubs, restaurants and guesthouses, and explores the remarkable history of places such as Groot Marico and Matjiesfontein.

I was staying at a guesthouse in Ladismith in the Klein Karoo when there was a sudden commotion among staff bringing in the laundry. They had spotted a Cape cobra entrancing the owner’s seventeen-year-old toothless Maltese poodle. A gallant neighbour, an attorney and nudist who had been mowing his lawn dressed only in a sun hat and running shoes, bravely hurdled the fence and dispatched the snake with a blast from his shotgun. To much hooting and applause he placed the cobra in a packet, dumped it in a bin and joined the guests on the wide verandah where he unblushingly hung around for the rest of the afternoon drinking wine. South Africa, healthily, abounds with eccentrics in every form. They are black and white, artists and adventurers, spiritualists and atheists, men and women, all brilliant. They can be found everywhere, in large cities, platteland towns, in caves, trees or next door. Some are gregarious; others are reclusive; and some will only join a crowd if it is rioting. They may never be seen; they may appear naked in the garden during thunderstorms to calm the garden gnomes; they may always be in your face; and they may suddenly go walkabout for extended periods. Many people have attempted to pinpoint what makes eccentrics tick, but their attraction lies in the fact that they are indefinable and unpredictable. There are, however, three qualities that each one possesses - fierce independence, passion and courage. They are people who do not merely exist, but passionately live life as if every moment is an exhilarating adventure challenging the mind and body. Because of this, they are all successful at what they wish to accomplish, though few are driven by financial motivations because they do not follow the rules that society lays down. [...]

RARE BIRDS
WANDERERS
The Warrior Princess
The Hitchhiker
The Patchwork Man of the Karoo
FUN ‘N GAMES
Calling Elvis
Going for Green
THE ARTISTS
The Gift
Princess Menorah
The Spiritual Eye
Little Donkey
PASSIONART
Soaring Art
Old Mother Hubbard’s Shoe
Dick se Plaas
PINK ELEPHANTS ON THE PLATTELAND
Mampoer Afrika
Oom Daantjie’s Garden Service
THE BANG BANG CLUB
Elvis Fletcher
King of the Road
Brave Girls Go Everywhere
A SIX PACK OF THE BEST
The Bar of the Royal Hotel
The Panty Bar
The Church Bar of the Royal
Hotel in Pilgrim’s Rest
Die Mystic Boer
The Star of the West
The Half
PRECIOUS THINGS
Diamonds Are a Girl’s Best Friend
Riding for Gold
SINGING OPERA FOR COWS
The Laird of Matjiesfontein
Rustler’s Valley
Holkrans
The Bosveld Hotel and Guest Lodge
LADIES OF THE MANOR
Queen of the Hearth
The Lion Whisperer
EVERY HOME A CASTLE
The Baronetcy of Broederstroom
The Collector
Goggatjie’s House of Love
THERE’S A GHOST IN THE HOUSE
e = mc² + ghosts
Unfinished Business
GHOSTBUSTERS
God’s Detective
The Exorcist
STARGAZERS
Ark of the Covenant
What the Hell’s Going on Out There?
KITSCHY KITSCHY KOO
Yesteryears
The Museum Store
Bruce Tait Antiques, Kitsch and Collectibles
LISTEN TO YOUR DREAMS
Nomadlozi
The Cybersangoma
THE DARK WOLF AND NOW FOR SOMETHING COMPLETELY DIFFERENT
Khuwana Tavern
Tings an’ Times Pita Bar
Mostaphas
Evita se Perron
Kapitans Restaurant
THE BOERE THAT GOT AWAY
Riding the Wave of Chaos
All Things Great and Small
The Lilac Butterfly
Kitchenboy
JOHNNY GO LIGHTLY COMES HOME
BLIOGRAPHY
GLOSSARY
INDEX

This is an excerpt from the book Eccentric South Africa, by Pat Hopkins.

Eccentric South Africa is a celebration of extraordinary people and places in South Africa.

The 101 wackiest, wildest watering holes south of the Sahara are introduced in Beloved bars of Southern Africa.

As a kind of ghosts’ directory, it’s fun to read of the places where spooks are apparently residing in South Africa.

Travel disasters in Southern Africa from the past to the present