Duwisib: A German castle in Namibia and its master Hansheinrich von Wolf, by Harald N. Nestroy 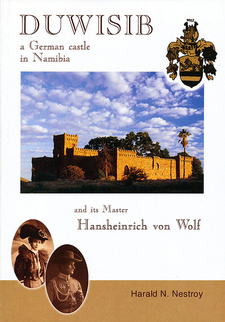 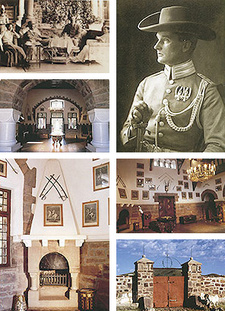 Duwisib, a German castle in Namibia and its master Hansheinrich von Wolf, by Harald N. Nestroy.

In his book Duwisib, a German castle in Namibia and its master Hansheinrich von Wolf, author Harald N. Nestroy describes the local history of Duwisib Castle and the biography of its German owner.

Every traveller in Namibia experiences the same surprise! Just a while ago he or she had been sitting in the bus or car, struggling against nodding off. For it seemed as though the weary journey had been an endlessly winding, dusty track through barren, brown-beige or red-coloured rocky outcrops amidst sparse, golden-yellow grass. In the blazing midday heat, the scanty vegetation with its grey-green bushes and lonely, sparse trees seems even more meagre. 80 km beyond Maltahöhe, the vehicle has just turned around yet another of the countless hills. Even though he has seen the well-known photos in many travel guides, the traveller wonders if his weary senses are now perhaps deceiving him - there suddenly before him, is a castle such as those to be seen in Germany or elsewhere in Europe! Situated defiantly on a rise of a basin-shaped valley, it is defended on all sides by rocky outcrops, some only 100 m high, others rising to 300 m. Two ephemeral rivers, whose sources are divided from each other by a narrow ridge only, twist their way out of the outcrops behind the castle. They embrace the hill on which the castle stands, before flowing into the broad Duwisib River, which millions of years ago, flooded the plain between the hills. […] First impressions of the Castle, which is almost rectangular (31x35 m), are overwhelming. It is given its special character by the castellation with which the perimeter walls have been decorated, the four "Risalit" corner towers, as well as the accentuated central tower which dominates the frontispiece. The towers are further decorated with Maschikuli cornices below the battlements. The main tower with its lancet arch below, and a flight of stairs in front, forms the main entrance. An ornamental framed oriel window, supported on two stone consoles, juts out of the tower facade above the entrance. The year 1909, in which the building was completed, is chiselled into stone below the oriel window. The external walls are built with rusticated cyclopean red sandstone, which was quarried two kilometres from the building site. It was transported to the site with much effort by local labour with the help of pack animals. The joints are not continuous as the stones are not of equal size. The red sandstone blends the building harmoniously into the lighter, bleached beige-red landscape. With a few exceptions, the windows in the external walls on the frontispiece are constructed in the form of embrasures, most of which have been secured by wrought iron screens. The courtyard, which is enclosed on three sides by single storey wings and by a high wall on the north-western side, does not allow vehicular access and therefore serves as a residential courtyard only. The courtyard wall incorporates two smaller lancet arched doorways for the Castle's domestic personnel. Windows facing the courtyard are of normal size. The loggia roof in the courtyard is supported on Tuscan columns. The loggia is widened at the rear of the main wing to form a roofed terrace or veranda. Two steps link the veranda to the courtyard. The latter is decorated with a splashing fountain, and shady trees. The palm trees inside were planted by the Master of the Castle himself, during the celebrations for the Castle's opening. The quite flat, mono-pitched roofs of the Castle slope towards the courtyard. They are covered with corrugated iron sheeting, which at the time of construction was an expensive modern material. [...]

This is an extract from the book: Duwisib, a German castle in Namibia and its master Hansheinrich von Wolf, by Harald N. Nestroy.

Duwisib: A German castle in Namibia and its master Hansheinrich von Wolf

The stuff of legends in in Namibia: the German farm and castle Duwisib dating of 1909 and its owner Hansheinrich von Wolf.