Dingo Firestorm. The greatest battle of the Rhodesian Bush War, by Ian Pringle. 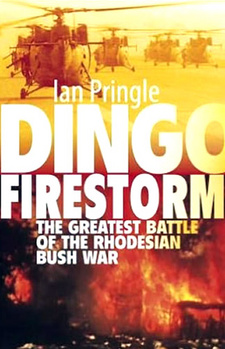 Deploying virtually an entire air force (61 aircraft) over hostile foreign territory and dropping 184 troops to face an enemy numbering in the thousands in two bold attacks are what in essence make Operation Dingo such a remarkable story. It needed sound intelligence, excellent planning and bold decision-making to pull this operation off. The story that follows is, to the best of my knowledge, a fair and accurate account of what happened. It is primarily a story about people. To tell their story, I have interviewed a selection of key people involved in Dingo. I have also used a variety of sources, both published and unpublished, to bring authenticity to the story. Most of the text within quotation marks is what I have been told; the rest I have drawn from the battle log, autobiographies and previous accounts of the operation. In some cases, such as aircraft radio patter, I have assumed that standard radio language took place. Underpinning the story are the standard operating procedures used by the Rhodesian forces, which were well tried and tested, albeit on a smaller scale before Dingo. Memories fade over time and, in some cases, I encountered discrepancies between what I was told, often very lucidly, and what has been written before. Although I have tried to seek consensus, sometimes this proved futile and, in most cases, I have gone with the accounts of those I interviewed and who were there during this operation. No doubt there will still be controversial and disputed elements in this book, something that is inevitable when looking back at an event that took place over three decades ago. The other issue is the operations orders (ops orders). Like all good plans, they were modified, tweaked and improved, so what actually happened differed in a number of cases from the written plan. An accurate written summary of the operation, however, is provided by the high quality of the air-strike log; this is supplemented by radio messages and telexes. Very helpful too was the Operation Dingo debriefing, which helped me clear up a few grey areas. And the invaluable Super 8 movie footage I was able to view - the only filmed account of parts of Operation Dingo - has given me a vivid, virtually first-hand insight into certain aspects of the operation. I was able to pilot a Hawker Hunter (from Thunder City in Cape Town) and simulate the attack profile that Rich Brand used to commence the Dingo attack, to give me a better feel for recording that tense moment. Granted, the adrenalin factor, precision, ground fire and weapons were missing, but it served a story-telling purpose. I apologise to residents in the Kommetjie area for disturbing their peace as I repeatedly rolled off my perch and dived at an imaginary target on the beach. Being a helicopter pilot has also helped me describe parts of the story about those amazing Alouette pilots of the Rhodesian Air Force (RhAF). The parachuting details of the operation have been reinforced by my own skydiving experience. There is an aerial bias to the book for which I do not apologise - every combatant in Operation Dingo got there and back by air. Place names, rivers, towns, and the like are presented in this book as they were at the time of the operation. The Zimbabwe African National Liberation Army (ZANLA) headquarters complex in the Chimoio district of Mozambique was known as New Farm, but it was often simply called Chimoio, and these terms are used interchangeably. The town of Chimoio, formerly Vila Pery, is 17 kilometres south of New Farm; I refer to this as Chimoio Town to differentiate it. The terms 'ZANU' (Zimbabwe African National Union), the political party, and its military wing, 'ZANLA', are used interchangeably according to the context: once the war started, the organisation's political and military identities very much merged.

This is an excerpt from the book: Dingo Firestorm. The greatest battle of the Rhodesian Bush War, by Ian Pringle.

Dingo Firestorm. The greatest battle of the Rhodesian Bush War

Dingo Firestorm is a fresh, gripping recreation of a major battle in southern African military history and Rhodesian Bush War.

A story of war and peace in Mozambique and beyond, Memories at Low Altitude spans four decades of southern African history.