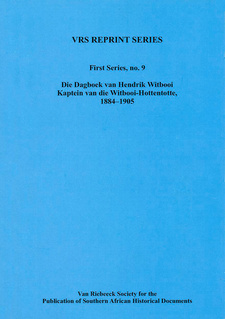 This reprint of the dairy of Hendrik Witbooi, Die Dagboek van Hendrik Witbooi: Kaptein van die Witbooi-Hottentotte, 1884-1905, dates from 2014. The rare original was published in 1929. The following introduction was then written by Gustav Voigts, one of the menubers of the S.W.A. Scientific Society. He was one of the oldest and most respected inhabitants of South-West Africa then, knowing Hendrik Witbooi personally.

(Translated from the German.) In the year 1891 I came from Chile to the Transvaal to join my brother Albert. On arriving at Schweizer Reinecke, I found him away from home, he having left a short time before with two other Germans by ox-wagon for Damaraland in order to make preparations for the establishment of commercial relations between that country and the Transvaal. After a year the expedition returned. In spite of difficulties and losses at the hands of turbulent Hottentots they had nevertheless arrived at a satisfactory result. It was decided to establish a business, with the help of our principal, Mr. Wecke, in Okahandja, the residence of the Paramount Chief of the Hereros. The goods would be bartered for Herero cattle, which would then Be driven Overland to the Transvaal to be sold in Johannesburg. Besides ourselves Messrs. Hermann Brandt and Bernhardt Mahler took part in the trek. They had already accompanied the first trek and later purchased Enkel-kameelboom, the present Mariental, from Witbooi. In July, 1892, we left the Transvaal with two well-spanned and well-equipped ox-wagons and trekked via Taungs and Kuruman through the Kalahari which we crossed without loss on the waterless stretch of 240 kilometres from Koes along the Molopo to Mier. At Karaam we came upon a mined and burnt-out Hottentot village. Brandt, an experienced German-South African, explained that this was one of the many instances of Hendrik Witbooi's cruelty. Evening after evening our conversation round the camp-fire turned to Hendrik. Brandt could narrate endless anecdotes about this remarkable Captain of the Witboois. Hendrik had subjected almost the whole of Namaqualand; tribes which refused to submit to him were exterminated. Towards the whites he was just and magnanimous, knowing well that,without them he could obtain no weapons and ammunition. On the last stage of the trek, in the neighbourhood of Karaam, ten delegates met us with a letter from Hendrik Witbooi requesting that the convoy should go to Witbooi's village, as he wished to purchase all the merchandise. My brother and Brandt knew well that, if they obeyed, Hendrik would take all our goods with the promise to pay for them with oxen after his next excursion to Damaraland. They therefore refused with the excuse that they had no authority to do so as they had strict injunctions from Mr. Wecke to proceed to Okahandja. The ten Witboois remained a few days, examined the wagons, particularly in search of weapons, ammunition and brandy, and on being unable to find any, drank up our whole stock of Dutch medicines indiscriminately for the sake of their spitituous contents, an act which produced the most remarkable effects. After they had recovered they purloined a number of articles they required and departed without paying. From Karaam we trekked to Enkelkameelboom. One evening we saw a camp-fire burning in the neighbourhood. It occasioned us some uneasiness, as it might belong to some of Simon Cooper's people from Gochas, who were fond of robbing whites. To our relief, however, Abel Isaak, one of Hendrik Witbooi's headmen, soon appeared and asked who we were and whither we were going. He did not molest us in the least, drank a mug of coffee and returned to his fire. Next morning we continued our journey over Kub and Rehoboth to Windhoek, which at that time consisted only of the fort and three houses. [...]

Die Dagboek van Hendrik Witbooi: Kaptein van die Witbooi-Hottentotte, 1884-1905, is a reprint of the edition of 1929. The introduction is written in English, the main text in Dutch.