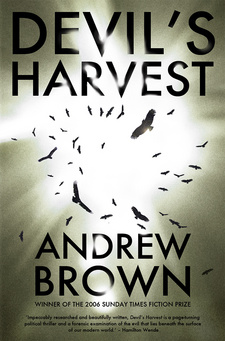 Previous to 'Devil’s Harvest' Andrew Brown has written the novels Inyenzi, Coldsleep Lullaby, Refuge, Solace and the memoir 'Street Blues', about his earlier experiences as a police reservist in South Africa.

This is not the running solo of hand-slapped drums, the ox skins pulled tight, beaten with euphoric eyes. It is not the dust on friendly feet, ochrered and rising thick like mist. There are no springing steps to mark this dance. This is the beat that announces the demons as they leave their lairs, that heralds the dead from the baked earth. This is the pulse that lures them - bud-a-bud-a-bud-a-bah - gnashing into the world. The ground trembles with their arrival, the rhythm descending from the hills as a bow wave before them. Drunken hands on a wooden bar - bud-a-bud-a-bud-a-bah. Hail hammering flimsy tin roofs. The apocalypse reveals itself, with thudding hooves and snorting breath. Janjaweed. Devils on horseback. A grandmother looks up from her washing under the haraz tree, hearing the cadence on the wind. The dense whorl of patterned scars on her forehead crinkles as she frowns. An elderly man grasps his gammy knee as he tries to get to his feet, but his stick is slippery in the heat and his grip fails him. His granddaughter giggles at the way he falls back with a sigh - aaahh - before muttering and trying again. Alek starts to move even before they come into sight. She knows, by the way the air suddenly smells of metal, filling her breath with the taste of blood. Sweat beads her brow as she rises from the edge of the silted reservoir. She hears the distant snort of the horses. Looking up, she sees the flapping of the doves as they whistle up the ravine. Bud-a-bud-a-bud-a-bah. In her mind she sees the dust that trails behind them like smoke from a fiery engine, drifting across the wilderness in the hot breeze. She does not need to wait to witness the dead countenance of their eyes. They are ghosts to her, risen from their graves to claim back all who have dared to continue living. The Devil is upon them, drumming his bony fingers on tabletops. Bud-a-bud-a-bud-a-bah. A bucket tips over at her side. The water spills and stains the dirt like oil. Or blood. To delay is to die. They have come for her father. But in his absence, she will serve their purpose well enough. She turns her back on the village. She heads past the luaak filled with longhorn cattle and out into the stark landscape, running. Her muscles strain at the thighs and her ankles quickly feel bruised as she struggles barefoot over the rocks. The red earth stains her skin like pollen. Behind her she hears the rumble of hooves getting louder, reverberating above the noise of the bleating two-tone goats and the lowing bull circling the cows in the luaak. The rocks are jarred and skewed, grinding against each other and the sensitive skin of her toes. She scrambles crab-like, hand over feet, down into the muddy wadi bed where the villagers grow their kudra and cassava. Then she hears the cries of alarm, the shouts of impotent warning. But still she charges, further into the desolate ravine. Only when she hears the roar of death itself, the howling of the monster as it devours its first soul, does she throw herself to the ground. [...]

This is an excerpt from the novel 'Devil's harvest', by Andrew Brown.