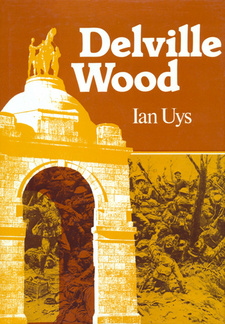 In his histroy book Delville Wood: July 1916, Ian Uys describes and documents the bloodiest battle hell of World War I year 1916, in which South Africans fought against German Imperial Troops.

The Battle of the Somme marked a turning point in warfare. Beforehand cavalry was the supreme weapon, afterwards the tank and aircraft reigned. Cavalry was used at the beginning of the Delville Wood fight and tanks at the conclusion in September 1916. For a brief spell it was the war of the infantryman alone. At Delville Wood the 1st South African Infantry Brigade was to show what that meant. Their feat can never be surpassed. Delville Wood is commemorated in South Africa by an annual service. Yet ironically no South African military unit carries it as a battle honour on a regimental colour. In addition, though it is generally known as the bloodiest battle ever fought by South Africans, very little is known of the men who were there. On 14 July, 121 officers and 3052 other ranks comprised the 1st South African Infantry Brigade. Six days later Colonel Edward Thackeray marched out with two wounded officers and 140 other ranks. Of these survivors one officer and 59 men of the light trench mortar battery had joined as reinforcements two days earlier. The bare statistics of the battle have sufficed for too long. In these pages we learn of the men who came out of the hell of "Devil's Wood" and of the men who didn't. Some years ago I was shown a booklet in which a grieving father recorded his tribute to his son, one of the South Africans who still lie in the wood. "It is very hard to part with him, but I glory in his glorious end, my splendid, chivalrous boy ..." The South Africans, both English and Dutch speaking, took and held the wood. For six days and five nights they fought and died in an inferno of exploding shells, flame-throwers, machine-gun and rifle fire. The shelling which reached seven shells a second reduced the wood to a wasteland. The Springboks hurled back overwhelming attacks by masses of enemy infantry until overrun and virtually destroyed. They fought hand-to-hand with the best troops in the German army. Outnumbered and attacked from three sides, their orders were to hold the wood and they did so. Colonel Thackeray inspired the bone-weary men by his example. He fought as a private would, with rifle and Mills bombs. When the survivors eventually paraded before Gen Lukin he took the salute with tears in his eyes. Why should Delville Wood be commemorated when other battles are not? In answer John Buchan wrote, There were positions as difficult, but they were not held so long; there were cases of as protracted a defence, but the assault was not so violent and continuous. As a feat of human daring and fortitude the fight is worthy of eternal remembrance by South Africa and Britain, but no historian's pen can give that memory the sharp outline and the glowing colour which it deserves. Only the sight of the place in the midst of the battle, that corner of splinters and churned earth and tortured humanity, could reveal the full epic of Delville Wood". Bearing this in mind, I have borrowed liberally from accounts given by the men who were there and in this respect it is their book. Accordingly I make no apology for the large number of quotations used. Publishers' names are given only for books not mentioned in the bibliography. An overall picture is presented of each day's fighting. The official accounts of the brigade, attached units and the four regiments follow. The experiences of the individuals involved are recorded within these units and listed in company order. It is thus possible to follow any one man's reminiscences by referring to his company in each chapter. As far as possible the day-to-day events have been recorded by company for ease of reference. Where the company is not known the relevant text is included with that of the battalion headquarters. Imperial measures, units and ranks are recorded as they were at the time. In addition the Battles of Bernafay Wood and Trones Wood are included, as they preceded Delville Wood and the latter should not be seen in isolation. The brigade was to endure much in the remaining years of the Great War, and many Delville Wood veterans were yet to pay the supreme sacrifice. I am grateful to the veterans of this epic battle who have assisted me in compiling this book. It is to them and their departed comrades that this book is dedicated.

This is an excerpt from the book: Delville Wood: July 1916, by Ian Uys.