Dealing In Death. Ellen Pakkies and a Community's Struggle with Tik, by Sylvia Walker 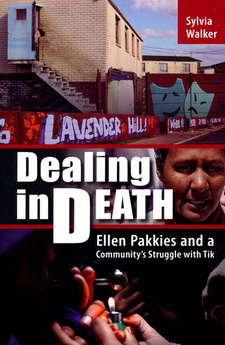 Dealing In Death. Ellen Pakkies and a Community's Struggle with Tik, by Sylvia Walker.

Sylvia Walker's book Dealing in Death looks at the global and local drugs culture, the predicament of Ellen Pakkies and other mothers like her, and an impoverished community and the apartheid laws that gave birth to it.

Preface: I met Ellen Pakkies a short while after her trial in early 2009. I had been aware of her story through the media, but had not followed it with particular vigour. Ellen spoke to me about a dream that she'd had - that her life story would be published one day. She had been approached by a number of people, apparently, but was not sure which route to take. I advised her as best I could, with the knowledge I had, on the process that would be involved. A few days later she approached me directly, asking me if I would write her book and have it published. I told her that it would be an honour, and I agreed to tackle the project. I set about contacting a publisher, and Ellen and I eventually signed an agreement with Oshun Books (an imprint of Random House Struik) to publish her life story. I was to ghostwrite' the book. Ellen and I began the serious work at hand. We spent some time together - two or three Saturdays - and she started telling me her story, beginning with her earliest childhood. After a couple of sessions, Ellen appeared reluctant to meet with me - she was too busy with other things, sometimes making excuses not to see me. It was strange, as she had been so passionate about the project just a few weeks before. This progressed to her not answering my calls. After I sent her a number of text messages, she finally replied that she did not want to go ahead with the book any longer, and that her husband had also said so. There were two options at this point: abandon the project completely, or continue with an entirely different focus. After much deliberation and discussion with the publisher it was decided to continue, but on a much broader level. I, personally, also had some burning questions for which I wanted answers: Why has tik usage increased at such an alarming rate? What is this drug and why does it affect users to such an extent? Why does it seem more prevalent in less affluent areas? What effective solutions are there to this problem? Why did Ellens story end like it did?

A facet of the tale had already taken a firm foothold in my mind: the issue of living with an addict. So much literature is focused on addiction itself, but Ellens story highlighted the plight of those affected by addiction. I also knew that Ellen was not alone - there are many, many mothers like her - and I was intrigued about why more mothers don't end up killing their children. Why, in this particular case, was the outcome murder? These questions and thoughts ignited the process of in-depth research, with the book taking on a new direction. A direction that, perhaps, would never have been possible if the focus had remained Ellens life story. Detailed information that Ellen had shared with me was set aside, as I respected the fact that she no longer wished her life story to be told in great detail. Court records, transcripts and newspaper articles were used to piece together the story of Abie and Ellen Pakkies.

Certain court evidence contained some facts about Ellens past that she had expressly asked me not to include in the book at the outset, and these have been excluded to respect her wishes. This is a story that had to be told. On the surface, it seems almost unbelievable on so many fronts: unbelievable that a mother could kill her own adult child; unbelievable that she admitted guilt from the moment it happened; unbelievable that she was not incarcerated after the trial. Yet beneath all of these facts lies the tragic and terrifying reality of living with addiction and the unbelievable limit a person can reach when pushed too far. The truth is often stranger than fiction, it has been said.

This is an excerpt from the book: Dealing In Death. Ellen Pakkies and a Community's Struggle with Tik, by Sylvia Walker.

Rescued from the maw of Hillbrow’s drug and prostitution underworld