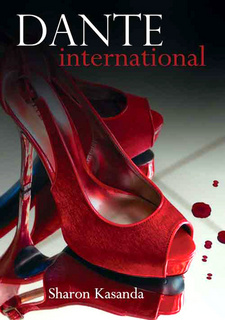 Dante International, an intense, sexy novel by Sharon Kasanda, Windhoek is the setting for some deadly crimes.

[...] The city that had once held such beauty and light for him, now held nothing but despair and torment. Every day was a nightmare. A nightmare of loneliness, of a perpetual coldness that was slowly growing in his heart, freezing out any other emotions that he could possibly have felt. The serenity that was Windhoek was amazing; the desert protected the city from the cold harsh reality of a new future and forced its intentions on the inhabitants, creating a safe haven of quiet peace and bubbling expectations; it made him sick to his stomach. He had tried to move, he had tried to run away, but his city would not let him go, always calling him hack until he returned to the sounds of the female kapana sellers, the hustling of the open markets and the bright glaring lights of the city centre. The serenity would return for a while, but then the desolation would hit; hungrily clawing, whispering and taunting him. He would make them pay for what they had done to him; the despair that had become a part of him would become theirs and he would make sure their lives became a living hell of bitterness, unforgiveness and the sweetest of nightmares. He shuddered now as he felt her skin grow cold under his touch, her body cooling like the heat had suddenly been switched off. He was kneeling beside her, stroking the curly black kinky hair on her head. It had seemed so alive a few moments ago and now clung to her lifeless body, shrouding the top of her head with its inky blackness. Tears of joy streamed down his face and he wiped them away hurriedly, the transparent gloves covering his hands absorbing the liquid before they could stain her perfect ebony skin. He had only been trying to take the pain away. He did not understand why she had resisted him so much. If only she could see how perfect she was now. how he had understood her and had seen her pain. He had made her whole so that she could be loved properly, by a real man. Her imperfections were gone and he forgave her for her depravity. She was so beautiful. Her gold stiletto heels had gleamed wickedly under the flashing strobe lights, which raced across the bare length of her legs to the little gold skirt that barely covered her. He had stared at her in pity, wanting to remove his jacket and cover up her nakedness. The shirt she wore had almost brought tears to his eyes. With no back and made of such flimsy silky material that her nipples peered through like a set of headlights, beckoning him to end her misery. He had done so gladly. Wrapping his jacket around her, placing a drink in her hand and whispering wha, a beautiful woman she was. It had been shamefully easy to pull her away from tin crowd. She had eaten up his compliments like a woman starved. He had not meant to end her life so soon. He had wanted to change her first, to free her properly. He had wanted to spend more time with her and tell her that she would want for nothing, that she would be free to be whoever and with whomever she wanted. She should have thanked him, instead of laughing and sneering at him halfway to his car, she had suddenly refused to leave with him. She had screamed a him, banging her fists against his chest, balancing precariously on her stilettos. Tin alcohol swirling and curdling through her system had been in full-force, slurring her words as it talked through her. It had possessed her, taking hold and twisting her into another being - the ugly being he was trying to get rid of. He had held her wrists firmly, watching with pity as she flailed against him, aiming kicks at him that rarely reached their mark, hurling verbal abuse and spittle at him, then resorting to begging him and crying to be let go. When she had finally resorted to sleazy sexuality, he had disgustedly wrapped his hands around her neck and forced all tht ugliness out of her. He felt relief, and had watched as the life drained out of her. She looked beautiful in death. He wished he could keep her like this forever. [...]

This is an excerpt from the crime novel: Dante International, by Sharon Kasanda.

Dante International: A serial killer on the loose and an ex-cop trying to redeem himself.