Cut flowers of the world, by Johannes Maree and Ben-Erik van Wyk 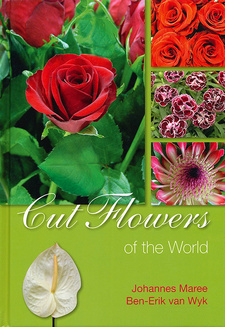 Most countries of the world produce floral products of some sort for domestic consumption. Approximately 80 countries are involved in the international trade of florist flowers, but only about 30 play a significant role. The Netherlands, Colombia, Italy, Kenya and Israel account for the bulk of global exports, with approximately 16 other countries accounting for the remaining few percentage points. Cut flowers are an internationally traded, high value commodity. Worldwide, retail trade is worth over US$40 billion per annum, and growing. Presently, the largest markets are China, the United Kingdom, Germany, Japan, the United States and the Netherlands. Other important markets are the individual countries of Western Europe, which have the highest per capita consumption of cut flowers in the world. According to the statistics available from the Flower Council of the Netherlands, Switzerland, Norway, Austria and Germany are the countries with highest per capita consumption of floriculture products. Traditionally the Japanese market, although very large, was supplied by a large number of very small local growers. In contrast, production in Colombia, Ecuador, Zimbabwe and Kenya is on a few very large farms. The United States is a large consumer market, and imports over halt of its total floricultural products consumed. The European Union consumes over 50% of the world's flowers and includes many countries with a relatively high per capita consumption of cut flowers. There is strong demand in Germany, the Netherlands, the United Kingdom, Switzerland, Italy and France. Germany and the United Kingdom are the two largest importers of floral products, with up to half of the United Kingdom's sales taking place through supermarkets and chain stores. Production in the Northern Hemisphere. The leading production countries in floriculture are China, Japan, the Netherlands and the United States. With rapid development in recent years, China has become the largest flower producer in terms of production area and yield, but presently only a very small percentage of this large production is exported. Japan's production area is nearly three times that of the Netherlands. However, productivity, quality and yields on Dutch farms are very high. Most Dutch flowers come from the Westland. This region is often called the "the garden of Europe" or "the city of glass" because the landscape is covered with glasshouses. Production in the Southern Hemisphere. Cut flower production in Israel, Colombia, Kenya and other South American or African countries (with the exception of South Africa) is virtually entirely for export. Most of these countries have an ideal growing climate or low labour costs, which outweigh many of the disadvantages of airfreight. The general movement of export flowers is from developing countries to the richer markets of North America and Western Turope. The Dutch flower industry still plays a central role in global trade and controls about 55-65% of the international wholesale trade. Production vs export and import. Production and export volumes do not necessarily coincide. For example, nearly all of production in Kenya and Colombia is for export, while nearly all of production in Australia, China, Japan and the United States is for local consumption. The Netherlands is the world's largest exporter of floral crops, while the United States ranks near the bottom of the top ten. Yet, the United States is the world's largest producer of floral crops, with the Netherlands second. The Netherlands has a surplus from both domestic production and imports, which it exports worldwide. The top five floral producers (including cut flowers, foliages and pot plants) are the United States, the Netherlands, Germany, France and Italy. With the exception of Germany, these top producers are also in the top ten exporters. The countries that import the greatest number of floral products are Germany, the United States, France, Switzerland, the Netherlands, the United Kingdom, Austria, Belgium / Luxembourg and Sweden. The United States gets most of its imports from Colombia and Ecuador, while the Netherlands gets most of its imports from Israel and Kenya. Otherwise, the Netherlands is the major supplying country to the remaining importing countries. [...]

This is an excerpt from the guide: Cut Flowers of the World, by Johannes Maree and Ben-Erik van Wyk.