Cross of Honour, by Ian Uys 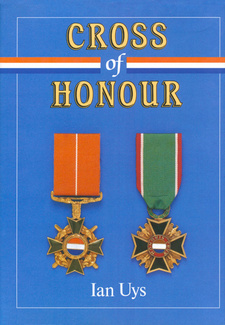 Ian Uys dedicated his book Cross of Honour to to all brave soldiers, sailors, airmen and police, whether or not they are recorded in it.

Although many books have been written about South African war heroes, the events have seldom taken place so near to home; yet never before has the public been so ignorant of the operations concerned. Some of the first acts of gallantry in the border war, displayed over 20 years ago, are still secret. Towards the end of 1975 I was on a platoon commanders' course at Kimberley when we were told that we might soon be engaged in a war. At the time our troops were fighting their way northwards in Operation Savannah. The world learned that the mysterious 'Southern Force' was led by SADF officers, yet South Africans remained ignorant of this for some time. The reluctance of the authorities to keep the public informed led to a general absence of interest in the 'Operational Area'. The recent spate of books on the border war has regretfully come very late. They are, however, enlightening to military historians. David Williams writing in the Financial Mail said this about the border war: The war in Namibia and Angola had always been unpopular among the South African whites, not least because it was conducted almost entirely in secret: the Cabinet could not afford an escalation. Of the front-line troops of the SADF he added: Many of them, in another time and fighting for a less complicated country, would have been heroes. By reading of the exploits of the decorated men, we are compelled to modify that statement: they were heroes! This book does not purport to glamourise heroes but to record deeds of valour that have made our security forces so formidable. Our present generation have proved that they are second to none; as brave as their forebears ever were. In an age of high technology our young men used old-fashioned bushcraft as well as modern sophisticated weapons. I have been privileged to meet some of these gallant men, and believe that their story must be told. Although it is only the exceptional deeds that are here recorded, they were done by ordinary people. Major Arthur Walker, Honoris Crux Gold and Bar, the most highly decorated of them all, said that one never thinks one is doing anything exceptional. 'You are only doing a job; what you do every day. Those who should be complimented are those who do the paper-work — which gets you a medal!' That is not false modesty, but a genuine appreciation. During World War II General Dan Pienaar was reluctant to recommend his men for medals, because he believed that it was their duty to be brave. Nevertheless he was extremely proud when Sgt Quentin Smythe won the Victoria Cross. We are grateful to the unknown men who recognised bravery in others and recommended that they should be decorated. A criticism could be their reluctance to recommend the highest awards. There were no recommendations for the Castle of Good Hope Decoration or for the Honoris Crux Diamond. The deeds of the SA Police are included as they formed an integral part of our security forces although not integrated into the Defence Force as they were in World War II. They were employed in a paramilitary role and involved in counter-insurgency and anti-terrorist activities before and after the SADF was in the operational area. Only those police acts of heroism in safeguarding the security of South Africa are here recorded. Many bravery awards were made to SA policemen for combatting crime and saving lives, such as the Laingsburg floods and the Westdene Dam bus disaster. These will, no doubt, be published someday. (...)

This is an excerpt from the book: Cross of Honour, by Ian Uys.