Country of My Skull, by Antjie Krog 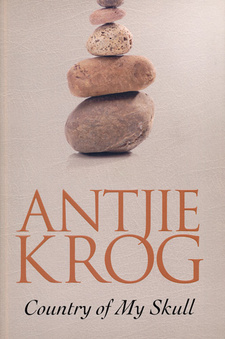 Country of My Skull, by Antjie Krog.

If one seeks to understand modern South Africa one must understand the politics of the last century. There is no better place to start than with the Truth and Reconciliation Commission (TRC). Antjie Krog's masterwork places you in the mind of both black freedom fighters and entrenched white Afrikaner.

They Never Wept, the Men of My Race

Sunk low on their springs, three weathered white Sierras roar past the wrought-iron gates of Parliament. Heavy, ham-like forearms bulge through the open windows - honking, waving old Free State and Transvaal flags. Hairy fists in the air. I run across the cobblestone street - clutching notepad and recorder - to the old parliamentary venue where the Justice Portfolio Committee is hearing public submissions on what to include in the draft legislation establishing a Truth Commission. The faces are grim in the hall with its dark panelling, old-fashioned microphones hanging from the ceiling, hard wooden gallery and green-leather seats ... 'Bellington Mampe ... Looksmart Ngudle ... Suliman Salojee ... Solomon Modipane ... James Lenkoe ...'A slow litany of names, read out into the quiet hall. The names of one hundred and twenty people who died in police custody ... 'Imam Abdullah Haroon ... Alpheus Maliba ... Ahmed Timol ... Steve Bantu Biko ... Neil Aggett ... Nicodemus Kgoathe ...' The chairperson of the Black Sash, Mary Burton, concludes her submission in the same way the Sash's meetings have been concluded for years: name upon name upon name. They fall like chimes into the silence. Journalists stop taking notes, committee members put down their pens - stunned by this magnitude of death that is but a bare beginning. The double doors snap open. The marching crunch of the black-clad Ystergarde - even on the carpet their boots make a noise. The Iron Guard, elite corps of the Afrikaner Weerstandsbeweging. Black balaclavas worn like caps, ready to be rolled down over the faces. Three-armed swastikas on the sleeves. Then, dressed in ordinary khaki clothes, hat in hand, in walks Eugene Terre'Blanche as if he is taking a stroll on his farm. Suddenly another kind of noise fills the hall. ANC Members of Parliament, secretaries, messengers, speech-writers, even a Minister or two, shuffle into the already crowded gallery and benches.

'We've asked for all the committee meetings to be adjourned,' whispers a black senator, 'we have to see this man with our own eyes - how real he is.' Expectation fills the air. Does Terre'Blanche's adjudant want to say anything? He jumps up. Salutes. 'No, I say what my leader say!' The chairperson of the Justice Committee, Johnny de Lange, shows Terre'Blanche his seat. 'Mr Terre'Blanche, what would you like to see in the Truth Commission legislation?' It is so quiet you can hear an alliteration drop. Terre'Blanche stays seated. Barely audibly, he asks: Dis hier waar ek vandag sit, hierdie sitplek, is dit die plek waar Sy Edele Dr Verwoerd dertigjaar gelede vermoor is met 'n mes in sy hart? [This seat I am sitting in, is it the same one where Dr Verwoerd was murdered with a knife in his heart thirty years ago?']

We look at one another. 'Indeed,' says the chairperson. Terre'Blanche stares at his hat until the changed context of blood and betrayal is dominating the silence. He gets up. He puts down his hat and moves out of the bench. Away from the microphones, the guards. He stands alone on the carpet. And the first word that enters the mind, despite the neatly trimmed grey beard, is: poor. The man is a poor Afrikaner. His khaki shirt is bleached, its collar threadbare. But poor as he is, he is a master of acoustics. As if he has made a study of the hall, he drenches us with sound - every tremor, boom, reverberating corner of that space under his command.

Translation! Members of Parliament, especially the exiles, ransack desks for translation equipment. They don't want to miss a word. [...]

This is an excerpt from the book: Country of My Skull, by Antjie Krog.

Country of My Skull

Country of My Skull captures the complexity of the Truth Commission’s work in a uniquely personal narrative.

This wonderfully rhymed and illustrated children’s book is about the imaginary fairy living around each species of Cape Fynbos.

A Change of Tongue

Ranging freely and often wittily across many terrains, this brave book provides an unique and compelling discourse on living creatively in South Africa.

Begging to be black

Experimental and courageous, Begging to Be Black is a welcome addition to Krog’s own oeuvre and to South African literary non-fiction.