Common Amphibians and Reptiles of Botswana, by Bernhard Clauss and Renate Clauss 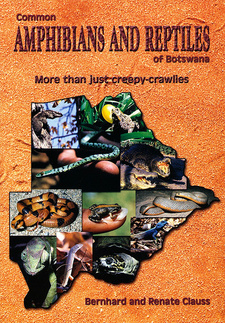 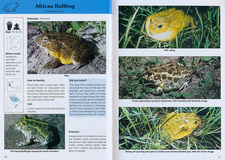 Only seven of Botswana's 70 snake species are life-threatening. The intention of Common Amphibians and Reptiles of Botswana is to tell you the difference between them and other snakes. Bernhard Clauss and Renate Clauss have spent three decades in Zambia and Botswana.

Frogs and Reptiles - what for?

Frogs and reptiles are not popular in Botswana. Although some can be a valuable source of food and income, many people consider these creatures to be "just things". Frogs and reptiles have generally been overlooked, and many species don't even have a name. A number of species are feared, misunderstood, and misinterpreted. At the same time, people are fascinated by them because of their strange appearance and behaviour; quite often they are linked with weird powers. Many people are convinced:

No frog in Botswana poses a threat to human health, and none of Africa's lizards are poisonous. Although some of them will bite In defence, all frogs and lizards are quite harmless. But what about snakes? They are widely persecuted, out of ignorance and misbelief. We are afraid of what we do not know, as can been seen in the following example from Maun, documented in the Ngami Times of 3 May 2002: A group of bystanders witnessed a large snake passing by and releasing something white which they thought "had something to do with an evil ritual or hell". Fact, however, is that they were observing something quite natural - the typical way in which snakes excrete solid uric acid to save water... There have always been beliefs, taboos and rules about animal groups with members harmful to humans. When it comes to snakes around, near or even in homesteads, the attitude has always been: "The best snake is a dead snake. It's better to be safe than sorry." On the other hand, when a snake is encountered away from home, it has been custom to stay clear of it, and not necessarily killing it. Culturally, this taboo was useful in sensitising the youth to the dangers, since they could not tell poisonous from non-poisonous snakes. Not all snakes are feared, pursued and killed, as the example of the harmless Stripe-bellied Sand Snake (mosenene) shows: it can be easily distinguished from other snakes and has been widely supposed to bring good luck. A taboo prevented its killing. Naturally, this had a conserva-tional impact. Nowadays it is widely believed that snakes have nothing better in mind than to harm and kill people. The Stripe-bellied Sand Snake is often killed just like any other snake wherever it is encountered, since generations have lost contact with rural and traditional day-to-day life. Wherever cultural values are withering, especially in urban environs, the traditional guidance "of those who don't know" has disappeared. This contributes to spreading wrong beliefs, misunderstandings and fears. Of course it is necessary to approach an animal with caution if you don't know whether or not it may pose a threat to your health. But this does not mean that it should automatically be killed. Let us continue with the facts, because people deserve to know better.

Some facts about snakes of Botswana:

This is an excerpt from the guide Common Amphibians and Reptiles of Botswana, by Bernhard Clauss and Renate Clauss.

Common Amphibians and Reptiles of Botswana

This guide attempts to illustrate that common amphibians and reptiles add to the diversity of wildlife in Botswana.

Overview of all types, their history, distribution, reproduction, behaviour and relationships to each other

Mammals of Botswana and surrounding areas

This is a easy-to-use guidebook to mammals of Botswana and surrounding areas including information on anatomy, physiology, skulls, spoors and droppings.