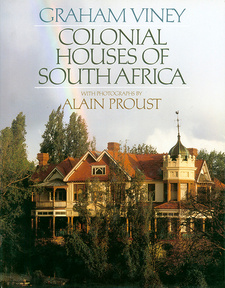 This great book by Alain Proust and Graham Viney introduces 23 famous colonial houses out of the past of South Africa.

In the last decade of the twentieth century, as the imperial age begins to fade from living memory, it is inevitable that the artefacts of empire be re-evaluated. Not least amongst these is the era’s architectural legacy. Initially some were inclined to view this as a delicate matter but, as the Soviets and other recently emerged proletarian states had discovered decades before, it has become apparent that the buildings of the ancien regime are not merely to be dismissed as monuments to a departed order. Rather they are freshly perceived as monuments, too, to the legions of often nameless builders whose labour and craft constructed and adorned them. As such they are objects of national pride and, therefore, worthy of preservation. Either point of view, however, still breaks new ground. In terms of architecture the label ‘colonial’ - much like the label ‘provincial’ - has hitherto carried with it pejorative connotations. From any universal standard of excellence it was inevitable that this should be so. Colonial architecture, and especially colonial domestic architecture, was traditionally held to have been restricted, if not actually prejudiced (as some said) from the outset by a dearth of talented architects and skilled craftsmen, by limited availability of materials and by the practical requirements of an unaccustomed climate. Moreover, it was produced by a society less structured and less socially competitive than its metropolitan counterpart, a society deficient in the dazzling opportunities provided by established wealth and the creative stimulus of a discerning cognoscenti. Not that it is correct to suppose that colonial society - in South Africa at any rate - was simply parvenu or merely, as Princess Alice put it to her sister-in-law Queen Mary, ‘common and mediocre’. On the contrary, the wide range of metropolitan classes it comprised (and the mobility between them which their new environment permitted) is apparent to the most cursory social historian. But it was a hostile climate for the rarer breeds, and a spirit of mediocrity was in- deed distressingly pervasive and sufficient to cause the most formidable social identities to falter within a generation. The settler class of ‘English county families ... rapidly becoming middle class,’ which Evelyn Waugh encountered in twentieth-century southern Africa, were, in fact, undergoing an adjustment that others had suffered for decades before. For it was not mediocrity as a norm that dampened enterprise and effort, but mediocrity actually held to be a virtue. And in this, standards inevitably suffered. Lack of skills and discriminatory standards is one thing; a fundamental shortage of ready money is quite another. Perhaps one should immediately ac- knowledge that domestic colonial architecture in South Africa produced almost no great houses. This is not an apology or a criticism, but a statement of fact entirely connected with economic forces. For until the discovery of diamonds and gold almost all houses in this country were modest - both in size and concept - not only by American standards, but by Anglo-Indian, and even Australian, ones as well. Doubtless Vergelegen, in the wilds of the Hottentots Holland, seemed impressive to the rather gushing Valentyn. But of the Dutch period, only Papenboom, one of Louis Thibault’s finest works, could have been described as elegant in the conventional sense of the word. It is not at all surprising that Lady Anne Barnard, by no means predisposed to sneer at all she saw, reckoned it to be thus. By the end of the 1820’s Lord Charles Somerset’s alterations had transformed Government House in Cape Town into an English gentleman’s country house of moderate size clad in colonial guise; and there is every indication that its interiors were as stylish as those at Newlands, the governor’s summer residence, and similarly remodelled by the glamorous viceregal couple. [...]

This is an except from the book: Colonial Houses of South Africa, by Alain Proust and Graham Viney.