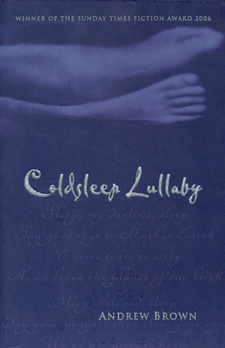 Coldsleep Lullaby is an excellent and gripping novel and an excellently presented chronicle of the complexities of the human experience, written by Andrew Brown.

She drifted in the water's slow current, her toes caressed by the grasses and blanket-weed lining the muddy bank. Although it was early morning, the water was warm. The February sun was bright, already scorching the thin clouds that passed beneath it. None of the pleasant moisture of dawn filled the air; instead the prickly dryness of summer breathed down the valleys and over the thatched roofs of the farmhouses. Drops of water on the vines, sprayed finely from automatic sprinklers before sunrise, had already been absorbed by the breeze, leaving only a dusting of sulphur patterned across the leaves. The gravel strips in front of the labourers' cottages were baked hard. In the distance, tarred roads shimmered in the strengthening heat, the mirage broken now and then by the first trucks leaving Stellenbosch for Cape Town. The early morning whirr of Christmas beetles and cicadas had stilled. Doves cooed quietly on the telephone lines, the singing birds buried deep in the thorny shade of the berry bushes. Three centuries earlier, the newly appointed Governor at the Cape had set out in such heat, perhaps less intense then - being November - but as overwhelming to the foreigner. He had brought his horses to the same water to drink, cool and brackish. This was the first river beyond the tiny colony; he and his companions had stopped on its banks and taken long draws of water, gratefully naming it the Eerste River. The river had witnessed the passing of history. For centuries, it had replenished ostrich eggs used by the San for storing water; it had quenched the thirst of the new colony's leaders and their horses; it had watered the first vines; witnessed the growth of the small settlement. And it had decided the fate of the towns inhabitants - the Dutch and English masters and their slaves, thrown together from across the world. The river had felt their dreams, their desperate hopes, cast like twigs into its course, flowing away from the town and into the sea.

Now the Eerste River pushed lazily along its bunkered course, grasses and boulders strewn across its path, sometimes blocking its way. Alien trees - pines, eucalyptus and plains - lined both sides, their roots snaking into the water. The grey crags of the Simonsberg, Jonkershoek and Pieke ranges gazed down onto the valley, holding it in a tight embrace and steering the river cautiously along at their feet. The town, 'Van der Stel se Bosch', nestled among the lower hills and slopes, protected and seemingly serene. Now the main streets of the university town were traversed by young women with red cheeks and loose cotton dresses, and young men with goatee beards and sandals - men too big for their boyish bodies, pushing bicycles - making their way to the first classes of the day. All displayed a lack of haste, the lazy ease of students. Some paused beneath the shade of elderly oak trees - the foreigner's blighted gift to the Eikestad - stubbing a cigarette into the run-off whitewash collected at the bottom of garden walls, or rearranging a rucksack, before setting off through the early morning glare.

Oak trees dominated the centre of the town, their asymmetrical trunks bulging and narrowing along their lengths. Thick boughs emerged unexpectedly, branching at irregular intervals, heavy and with little foliage. The older trees sported protrusions at their bases, giving them the surreal appearance of having melted into the pavement. Some had massive hollows at their centres, where the wood had been gnawed by grey squirrels and beetles, or rotted away, leaving ledges of white and orange fungus. The patterned symmetry of the occasional cypress or pine only emphasised the confident majesty of the oaks. Leiwater trickled alongside the paths, running under rounded pedestrian bridges and disappearing into drains, in places flanked by ornate whitewashed walls. The water oozed from beneath tarred roads over beds of moss and bright green algae. Fallen oak leaves, curled and browned by the sun like shrivelled dead chameleons, lined the sides of the deep channels, providing a moist cover for small black river crabs, shiny millipedes and isopods. Cellophane crisp packets and crushed cigarette boxes poked out from the beds of leaves, glinting in the sun. The smell of guavas mixed with the exhaust fumes of tour buses and taxis. [...]

This is an excerpt from the book: Coldsleep Lullaby, by Andrew Brown.