Children in Etosha, by Jenny Davis 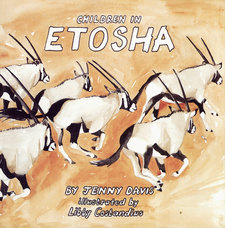 The following excerpt from Children in Etosha by Jenny Davis describes an observation at the Okaukeujo Waterhole.

Tourists from many parts of the world were sitting under the ancient camelthorn trees enjoying watching the game at this famous waterhole. Undergrowth had been cleared directly in front of the low, protective stone wall, to give the tourists an uninterrupted view. From the tall leadwood trees on the left, thick green bush spreads out in an arc on the far side of the waterhole giving shady protection to birds and animals - and to predators lying in wait for their unsuspecting victims! During the dry season, hordes of animals flock to this place in search of water, making it one of the greatest tourist attractions in the Etosha National Park. A group of schoolchildren were standing on their own at the far end of the wall. They had become friends over the period of their stay there, despite the fact that they were from very different areas and backgrounds. The thing that bound them together was their love of nature and their intense curiosity. Plump young Kirsty and her older brother, Samuel, were from Owambo, in northern Namibia. The older, somewhat studious boys, Jarinaani and Nguzu, were friends from Opuwo who were travelling through the Park with Nguzu's father. Chris and his younger sister, Karin, were from Windhoek. During the few days in which the children had got to know each other, Karin had become quite protective over the two youngest ones of the group - the twins, Adam and Gemma, who were visitors from Cape Town.

'Sh! Here comes an elephant!' whispered Kirsty to Samuel, who had been talking quietly to Nguzu. 'He's so big, but he walks so quietly.' 'He has fatty pads under his feet, that's why he walks delicately - like this,' and Samuel gave a demonstration, to the amusement of the others. He was tall for his fourteen years and enjoyed acting and showing off his height. 'Then you shouldn't call me a clumsy elephant ever again!' cried Kirsty, frowning at her brother. 'Hush, my fat little sister, you'll disturb ...' 'Hey!, whispered Chris, nipping the quarrel in the bud. 'It's the same old male that we saw last night with the broken tusk.' 'How did he break it?' asked Gemma, wrinkling her little freckled nose and pushing her long dark fringe from her hot forehead. 'The water here lacks certain minerals, so their tusks are brittle and break easily when they fight or dig for water. They also have smaller tusks than most other elephants in Africa,' explained Samuel. 'Oh, you smarty-pants! How do you know all this?' Kirsty tried to scowl, but couldn't help smiling. Although she resented his teasing her, she had a great admiration for her older brother. 'Nguzu, Jarinaani and I spoke to Mr Quinn in the shop yesterday. He told us lots of things about the animals here, didn't he, Nguzu?' 'Yea,' came the absent-minded reply. Nguzu was engrossed in studying the surrounding bush through his new binoculars. 'Who is Mr Quinn?' asked Gemma, touching Jarinaani's arm. 'He works at the Ecological Institute, that large stone building near the museum,' replied the fifteen-year-old lad, the oldest of the group. 'This old elephant looks so lonely.' Adam suddenly drew their attention back to the waterhole. 'Perhaps other males will join him later on,' whispered Karin, putting her arm around the bespectacled little six-year-old. [...]

This is an excerpt from Children in Etosha, by Jenny Davis.

Children in Etosha is a nicely made and well written children's book, suitable to children from 8 to 12 years old.