Catch it, cook it in Southern Africa, by Hennie Crous. 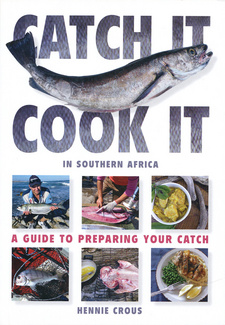 Please note that the Hennie Crouses recipes provided in Catch it, cook it in Southern Africa under a specific species can often be used with other types of similar fish. It's easy to try out new ways of cooking fish, especially fish that you have frozen, or of which you have too much and need to vary the cooking method.

Spotted Grunter are found from False Bay as far as the coastal waters of Mozambique and beyond. Their favoured habitat is rivers and estuaries and along sandy beaches, particularly close to river mouths. In rivers it is possible to fish for them with ultra-light tackle - they provide excellent sport. They like feeding in the shallow prawn banks, and can occasionally be seen feeding with their tails clear out of the water. They have a long snout and, in this vertical position, they literally blow prey out of their holes and burrows in the sand or soft mud. They mostly feed on two species of prawn that are found in these holes, which can clearly be seen when the tide goes out. Grunters that are feeding with their tail up can be frustrating to catch; so intent are they on what they are doing that they completely ignore the prawn bait you are casting deliberately close to where they are feeding! Fishing these prawn banks for grunters, or at the edge of the channel next to the prawn banks, is the ideal spot; and it helps if the wind and strength of the tide allow you to drift side-on along this edge in a small boat. If pumping prawns is too much effort, then dropshot fishing with its many variations of artificial worms and prawnlike lures is the way to go. These fish put up an excellent fight. I have such a soft spot for them that I prefer, as I do with most of the Galjoen I catch, to tag and release them. Not many tagged grunter have been recaptured (or at least the incidence has not been regularly reported), so the more specimens that are tagged and released, the better for the scientific record. Be that as it may, they are excellent table fare, with firm, white flesh, and keeping one for the table is certainly not a sin. Keeping your catch cool is, again, key to ensuring you take home a top-quality fish. Scale, gill and gut at the water's edge, making sure that the bloodline close to the backbone has been cleared out.

This species lends itself to being cooked on the braai. The flesh is firm, the skin quite tough and, as a result, the fish is unlikely to fall apart during the process. Fillet it by running the knife close to the dorsal fin on both sides (see description for Geelbek on page 21). The fillets can be kept whole and grilled or braaied, or cut into portions to use in the recipes that follow.

The Spotted Grunter has firm white flesh with its own unique flavour so enjoying it simply braaied or grilled is first prize. As a variation, try the following.

INGREDIENTS: Grunter fillets cut into portions (any size you choose) plus any combination of prawns. Black Mussels (or a tin of smoked mussels, which adds loads of flavour, but add only at the end), calamari or marinara mix.

METHOD: In a large pot (I like to use a cast-iron pot, on gas) heat the oil and soften the carrots, potatoes and spring onions for about 5 minutes without browning them, stirring often. Add the fish stock and bring to the boil. Add your selection of seafood ingredients and let the soup bubble away for 20-25 minutes. Check after 15 minutes to ensure that the fish is not falling apart. If this is happening before the 20 minutes is up, turn down the heat. Add the milk and cream and heat through. If you are using smoked mussels, now is the time to add them. Heat through, add Tabasco sauce and adjust the seasoning. Serve in large bowls and sprinkle with parsley. Ciabatta bread and a couple of glasses of white wine will round It off quite nicely! (Serves 4)

This is an excerpt from the book: Catch it, cook it in Southern Africa, by Hennie Crous.

Catch it, cook it in Southern Africa

Catch it, cook it in Southern Africa bridges the gap between catching your fish and bringing it to the table.

Saltwater Fishing in South Africa is a practical guide to the how, when and where of angling along the South African coastline.

Savannah to Sea. Fine cuisine under an African sky

Savannah to Sea. Fine cuisine under an African introduces starters and snacks, main courses with white and red meat, fish and seafood, and game, baked delights, and desserts and sweet treats.