Cape Town then and now, by Vincent van Graan 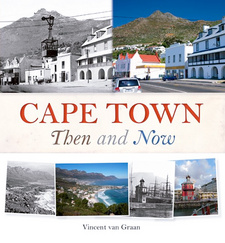 The Castle of Good Hope is the oldest building in South Africa. The cornerstones for the building were laid in 1665. Built in the shape of a pentagon, with a bastion at each corner, it was first occupied in 1674. The five bastions were named after the titles held by the Prince of Orange: Buren (north), Leerdam (west), Katzenellenbogen (east), Nassau (northwest) and Oranje (southwest). The original entrance was between Katzenellenbogen and Buren, and faced the sea, which at that time reached the castle walls. In 1682 a new gateway, which is the present entrance, was built. A 25-metre-wide moat was dug around the Castle to offer further protection. Inside the massive walls was the Governor's residence, fronted by the imposing De Kat balcony. Here the new Governor was sworn in and proclamations were made. Also within the Castle were quarters for officers and men, cells for prisoners, storerooms, workshops and kitchens. The Castle was extensively renovated in the 1980s. Today it is the best preserved example of a Dutch East India Company fort and a popular tourist attraction, as well as being an active military facility. In the Governor's residence is displayed part of the William Fehr Collection, a noted collection of oil paintings, furniture and decorative items from the colonial period.

The Grand Parade was the first public open space in Cape Town. It was used as the training ground for the Castle garrison. Public functions, such as the annual celebration of Queen Victoria's birthday, were also held here, and there was a regular market. The Parade became known as the Grand Parade to distinguish it from the Little Parade, later named Caledon Square. Various buildings were constructed around the perimeter: the City Hall, an Opera House, the Drill Hall and the Commercial Exchange.The City Hall, now the home of the Cape Philharmonic Orchestra, was designed in the Italian Renaissance style and built of Bath stone. This impressive building was completed in 1905. The clock in the tower was modelled on Big Ben in London, but is half the size. The tower contained 37 bells, first rung when the Prince of Wales visited South Africa in 1925. Later, another two bells were added. The red-roofed Drill Hall, visible to the left of the City Hall, opened in 1885 and was designed to serve as an indoor venue for military drilling in bad weather and as the headquarters of the Western Division of the armed forces. Today it houses the Cape Town Central Library. The Opera House was demolished in 1937. The present-day Parade is half its original size. When Cape Town station was built in 1879, it swallowed up part of the Parade. The impressive Victorian station building was demolished in the 1960s and a modern rail terminal erected in its place.

The street now known as Adderley Street has had several changes of name over the years. Initially it was known as Burgwal, then as Voorste Straat. When the canal (gracht) was later constructed, it became known as Heerengracht. Charles Bowyer Adderley was a British politician. In 1849, when the British government announced plans to establish a penal colony at the Cape, he vigorously defended the Cape's refusal to allow this. Thus Heerengracht was renamed Adderley Street as a gesture of gratitude. Trams and hansom cabs were still to be seen in Adderley Street in the 1920s, but in 1939 the last tram ran and horse-drawn vehicles eventually gave way to motor traffic. A number of the buildings depicted in photographs taken circa 1910 still exist and are immediately recognisable. Even though some of them have been modernised at ground level, a glance at the upper storeys will confirm their Victorian origins. The magnificent Standard Bank building in Adderley Street was designed in 1880 by Charles Freeman. Built by Thomas Ingleby, it cost ¿£27 000. Initially the building had only two floors, but in 1897 an additional two floors were added. In 1921 further alterations were made, and the statue of Britannia was replaced on the high dome. The Standard Bank of British South Africa was established in London in 1862. The colonial head office of the bank was initially in Port Elizabeth. (Later, the name was changed to the Standard Bank of South Africa.) Cape Town, having better communications with both the interior of the country and overseas, became the location of the bank's head office in 1885. [...]

This is an exerpt from the book: Cape Town Then and Now, by Vincent van Graan.

Cape Town then and now

Cape Town Then and Now is a unique visual portrait of Cape Town and the Cape Peninsula.

The perfect companion for the urban sightseer, Walking Cape Town features 33 easy urban walks and drives in the Cape Peninsula.

One Love, Ghoema Beat - Inside The Cape Town Carnival

One Love, Ghoema Beat offers a comprehensive look at the minstrel troupes that are the exuberant face of Cape Town's Carnival.