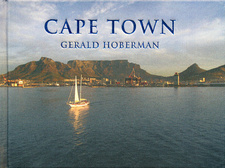 This fifth edition of Gerald Hoberman's Cape Town (Medium-Hoberman) has been updated and three maps have been added, in line with our more recent publications. Shipwreck symbols on the principal map indicate some of the better known sites and add spice and romance to the 'Cape of Storms'.

When city administrators decided that the time had come to construct the one vital piece of missing tourism infrastructure in Cape Town, a team of internationally experienced architects, engineers and designers rose to the challenge of creating a state-of-the-art facility that could compete with the best in the world. Completed in 2003. the Cape Town International Convention Centre is situated in the heart of one of the world's most beautiful and popular cities and is within easy reach of most of its famous tourist attractions. The convention centre has two auditoriums, 33 meeting rooms, a roof terrace room with a view, and 10,000 nr of uninterrupted exhibition space, and can host 10,000 guests.

What some saw as simply a working harbour, others saw as one of the most romantic settings in the world When in the late 1980s port authorities decided to turn their loss-making asset into a going concern, little did they know that their visionary plan would become an internationally acclaimed success story. Spanning 123 ha of land and water areas and representing an almost R2-billion investment in the city of Cape Town, the redevelopment of the once derelict harbour into the V&A Waterfront has been described as bold and dramatic. Today it is a premier tourist destination, attracting close to 2 million visitors per year.

The Old Port Captain's Office Building, now handsomely restored, was built in 1904. when the harbour was expanding rapidly and the management of the docklands became an increasingly sophisticated endeavour. The gabled building stands next to the Cut' at the entrance to the Alfred Basin, and replaced the nearby octagonal. Gothic-style Clock 'lower built in 1882 as the first Port Captain's Office and used as a lookout by shipping controllers and berthing staff. The Clock lower housed the only tide gauge on the coast at the time. The oldest building on the pierhead is the Harbour Cafe, opened in 1903 as a public tearoom. The building continues to function as a restaurant.

This magnificent Victorian-era octagonal clock tower painted a colour similar to that of its original brickwork is situated on Clock Tower Square. An icon ol the old Cape Town docks and a symbol of the V&A Waterfront, it stands sentinel over the comings and goings of the busy harbour - just as it has ever since its completion in 1882 as the first port captain's office. Since then it has served duly as a reading room for visiting ship captains and as an office building for fishing giant, Irvin & Johnson. The building was restored in 1997. The mechanism of its elegant clock was made in Edinburgh, Scotland. by J.A. Richie & Son in 1883. The clock was restored in 1976. On the ground floor of the tower is a tide gauge which, when operational, allowed passing vessels to determine the ebb and How of the harbour waters. The wall of the stairwell leading to the second floor is graced by a painting of the Madonna and child. The second floor features a mirror room, which gave the port captain 'eyes at the back of his head', thus enabling him to have a view of all activities in the docks. Today this room houses a restaurant serving light meals, which is run by famous restaurateur Peter Veldsman of the nearby Emily's Restaurant. An elegant swing-bridge links the Clock Tower Precinct with the Pierhead. [...]

This is an excerpt from the book: Cape Town (Medium-Hoberman), by Gerald Hoberman.