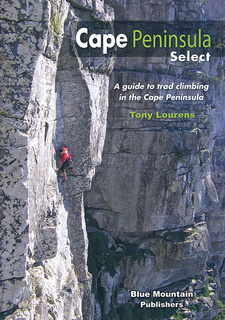 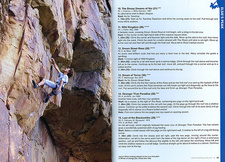 The timing of Cape Peninsula Select: A guide to trad climbing in the Cape Peninsula by Tony Lourens couldn't be more appropriate. The handful of old climbers in the Western Cape who are still active will have noticed the slow swing of the pendulum as their favourite pastime, now renamed 'trad', is finally undergoing a revival.

They had little choice when they started out; if they wanted to climb, they had to fit the odd primitive piece of gear into the rock and hope that their buddy would do the right thing with the other end of the rope if their lead went badly. When sport climbing, followed by desperate bouldering, took off worldwide, climbing underwent a dramatic surge and many locals began head-pointing on steep shorter crags. Locally, as well as worldwide, technical standards went through the roof. These standards have finally begun to affect the trad climbing scene on and around Table Mountain, which will tend to have a positive ripple effect on the abilities of all climbers. Human endeavours are unlikely to succeed without constant effort at improvement. So, if new rock climbs didn't tend to be more difficult, many of us would have turned our attention to some other activity. I know that some old-timers will disagree and argue that it's all for fun, but they should realise that their 'fun' was once at the cutting edge, whether on Arrow Final, Jacob's Ladder or Roulette. In the same vein, today's hard core climbers may find it difficult to imagine Double Jeopardy as a warm-up route, but Roulette, which wanders easily past on the same piece of rock, was a serious challenge to open. Cape Town has always been a potential centre for world-class trad climbing. The same doesn't quite apply to our sport climbing, even though it started well at the Mine, the Hole, and especially in Montagu. Partly due to restrictions on bolting in environmentally sensitive areas, but also because of limited blank or overhanging rock, development of new sport crags tailed off around the turn of the century. This has not been the case in many other parts of the climbing world, where limestone crags can extend for kilometres. So here we are with excellent natural trad climbing around the city of Cape Town, including scope for plenty harder routes, and young climbers have noticed! This new book can only assist in the process of revitalising the local climbing scene. Crowded venues don't appeal to me personally, but I have sometimes felt quite lonely at the crags! The chance of this book causing a popular revival to the extent that we see environmental degradation, or have to queue for trad routes, is pretty remote. Plenty of climbers will stick with sport climbing, and find that it satisfies all their leisure needs. On the other hand, some believe that prepared routes encourage the evil of sponsorship, so that everyone and his dog will come and throw their litter around at the crags. I like to think that we should be aiming for something between these two extremes. Climbing is quite a broad and varied pastime, as witnessed by the fact that some climbers look like old fashioned pirates, while others, who normally drink espressos between pitches, look a bit like fashion models (at least according to Jeremy Samson, author of Cape Vertical). In spite of these differences, we probably have more in common than not, but when local climber, Andrew de Klerk declared 'The difference between Alpine climbing and bouldering? Well, there is none', I couldn't quite agree with him! As probably more of the old pirate type, I confess to trying 'boulder tricks' now and then (naturally without much success), but I've always wanted to expose sport climbers and boulderers to trad climbing. Part of my motivation has simply been to get young people out into the spectacular environment where trad climbing normally takes place. Surely, even a dedicated sport climber would enjoy sitting on a small ledge above Touch and Go with its eagle-eye view of Camps Bay beach? When Tony showed me the rough draft of this book, I was astonished at the amount of work he had put in. Most of us wouldn't have had a hope of on-sighting a project this difficult. For one thing, our attention span is too short! Young climbers in particular will benefit enormously from Tony's efforts, especially now that many of them have already been exposed to the multiple dimensions that trad climbing has to offer.