Call me master, by Olga Levinson 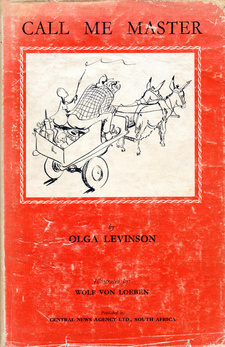 Call me master, by Olga Levinson.

In her book Call me master, Olga Levinson describes habits and inhabitants of the old South West Africa in 20 stories.

"A Game of Mauscheln"... Among the smart stepping Schutztruppe that landed in South West Africa in the year 1893 to reinforce the garrison at Windhoek, was a young man called Eduard Schultz. During the various native uprisings that took place he showed himself to be a well-disciplined drinker. He was, too, a man with a very real appreciation for the frailties of the fair sex. When, at last he was honourably discharged from the Army after recurrent attacks of Malta fever, he decided to settle in this sparsely populated territory, professing an instant liking for the country - or perhaps to put it more accurately, for the widow who ran the Hotel Bismarck in Windhoek. In due course she acquired a husband, he acquired a hotel, and they both acquired a daughter, Renate. Unfortunately Frau Schultz did not enjoy the pleasures of family life for long, as soon after Renate's first birthday, she was seized with a severe attack of appendicitis and duly departed from this world with the assistance of her doctor. Renate matured rapidly, as customary with young girls in tropical climes, and very soon she had blossomed into a fine sturdy Fräulein with a coil of flaxen hair wound round her head, sunburnt arms and legs, cornflower blue eyes and full cherry lips. By the time she was sixteen she had already finished stitching her whole trousseau, including beautifully embroidered tablecloths and linen, finely worked sheets and pillow-cases with lace insertions, doilies and handkerchiefs with crochet edgings, and other such delectable preparations for marital bliss.

She had also finished collecting a canteen of German silver, an exquisite assortment of little mocca cups called "Sammeltassen", some cut-glass bowls, various sized pots and pans, and other delights for connubial felicity. Most of these were gathered over the years from a doting parent, fond relations and admiring friends, who usually presented her with some such useful gift for her birthday and Christmas. In fact, everything was ready for the forthcoming marriage - except the bridegroom! Now, it was not as though Renate was lacking for suitors. It was just a matter of sifting the "gain" from the chaff- and finally she narrowed the odds down to Hans, Franz and Fritz - Fritz being the most gain. Fritz was also the oldest of the wooing trio. In fact, Fritz was old, being thirty-six to Renate's sixteen. However, Fritz was the possessor of two fine farms, "Berlin" and "Cologne." "Berlin" was seven thousand hectares in extent, while "Cologne" was a mere five thousand hectares. On these twelve thousand hectares in all grazed some thousand head of cattle.

But to get back to Renate. At this time she was serving in her father's bar in the gay little capital of South West Africa. Papa Schultz, realising the attractions of his motherless Töchterlein, had pondered where he could keep her so that she was under his eye most of the time. He at last came to the sensible conclusion that the most obvious place was the bar. And so our pretty Renate blushingly filled the glasses of admiring males, her delicious bosom playing a fascinating game of hide and seek amid the bottles. But that year, there was an unusually large crop of fatherless babies in Windhoek, and when Papa Schultz observed that his fourth unmarried chambermaid in the hotel was beginning to put on a little weight - and it certainly was not all fat - he actually refused a glass of beer and began to think. Yes, there was no doubt about it - Renate Schätzchen must make up her mind between Hans, Franz and Fritz - and marry Fritz!

The happy nuptials were announced, and Papa Schultz had a houseful of new furniture specially made of fine red "chivi" wood from the north, and at last the great day came. Everybody in Windhoek and from farms far abroad gathered together at the Hotel Bismarck, and celebrated for three days without a stop. Those were really the times when the ladies, overcome with coy giggling, were lifted onto the counter which Papa Schultz gallantly wiped clean, and then had their shoes filled with champagne. It was all very wonderful and unforgettable to Renate, even though her shoes never felt quite the same again. When Fritz at last carried away his beautiful young wife to "Berlin" and "Cologne," his dear friends were still celebrating his good fortune in the bar in Kaiserstrasse. And if his breath did smell somewhat. . . well. . . alcoholic - it was at least a comforting familiar odour to Renate.

And so the years passed. Renate baked, cooked, polished, sewed, scrubbed, knitted, nursed the children and scolded the stupid native servants. She was an excellent Hausfrau, and the whole farmhouse was spotless and shining, and the kitchen looked like an old Dutch painting. If she still had a secret hankering for those carefree days in the bar of the Bismarck - well, who could blame her. At any rate, she never reproached anybody - other than her husband, of course! Then, in her twenty-eighth year, just when the future looked completely settled and serene - there befell to Renate her great adventure.

Now Fritz had just one failing (if one excludes women and drink). He was an inveterate gambler, and as he grew older, so out of all proportion grew this mania for playing for high stakes. His favourite game was an old German one called "Mauscheln", very popular in the early days of South West. Everyone said Fritz was a good sport at this game. He usually lost. A neighbouring farmer called von Plotzheim was, perhaps, the loudest in his praises of Fritz's good sportsmanship. He usually won. Far from the ignorant conceptions of South West Africa, held by so many people all over the word - I mean, those that have heard of it - it is not just a country of rugged pioneers.

On the contrary, some of the bluest of blue blood runs in the veins of several of its inhabitants. Von Plotzheim was the possessor of a distinctly cobalt variety, and as such he was highly respected by his neighbours, his noble lineage being like an "open sesame" into their hearts and homes. The fact that he had left Germany in a highly suspicious hurry, and that there was said to be an actress involved, and a formidable line of unreasonable creditors - well, that just really added to the glamour that already surrounded his ancient name. [...]

This is an excerpt from the book: Call me master, by Olga Levinson.

Full of most interesting biographies, the book Jewish Life in South West Africa / Namibia: A History, was published by the Windhoek Hebrew Congregation after many years of compliation.

SWA Fables: The guinea-fowl and other fables from South West Africa

SWA Fables: The guinea-fowl and other fables from South West Africa is a well known and popular children's book in Namibia in English, Afrikaans and German.