Butterflies of the Western Cape, by A.J.M. Claassens 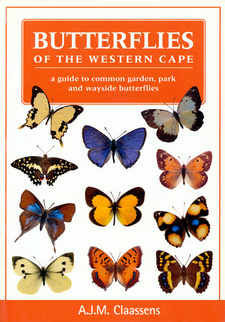 Butterflies of the Western Cape, by A.J.M. Claassens.

With Butterflies of the Western Cape, A.J.M. Claassens wrote an informative, user-friendly guide that assists gardeners and nature lovers alike.

Where have all the butterflies gone? In 21st-century suburbia, a burgeoning population demands the removal 1 of indigenous vegetation to make way for increasing urbanisation, which '4 in turn raises pollution levels to an extent that the environment becomes unstable for the survival of butterflies - as well as many other forms of wildlife. In fact, conspicuous populations of butterflies are a good indicator of a healthy environment, as they are extremely vulnerable to pollution in particular. Coupled with the ongoing destruction of the natural environment is the liberal, often unwarranted use of a variety of deadly insecticides and pesticides on common garden plants, as well as in agriculture. These are obvious reasons for the apparent decrease both in numbers and variety of species of butterfly found in the Western Cape. However, even though these beautiful insects are not as common as they once were in our gardens and parks, and along roadsides, they are by no means extinct, and much can be done to entice them back into our environment.

The larval food plant is fundamental to the butterfly's survival, and the planting of indigenous species in your garden will do much to encourage the return of these insects to suburbia. Of course, while butterflies are likely to be found in gardens and other man-made or controlled environments, they are unlikely to occur in large numbers in the inner city. Likewise, many butterflies found in the eastern reaches of the Western Cape are absent from the southwestern reaches of the province, some with their range limit no further west than Swellendam, others with their most westerly limit being Mossel Bay. For this reason, the natural distribution of the species is as important to its presence in your garden as is its food plant.

Local is lekker: Butterfly larvae, or caterpillars, feed mainly on the leaves, buds or flowers of indigenous plants, although a number of species have adapted to feed on certain introduced flora. Whereas the larvae of many butterfly species are very specific in their choice of food plant, the mature insects are less choosy, and feed on the nectar of many different flowers. The planting of indigenous fauna will inevitably entice wildlife - in the form of butterflies, frogs, lizards, birds and even small mammals - back into urban and suburban gardens.

The practice is gaining popularity, particularly in the face of recent publications, for example, Butterfly Gardening in South Africa, by J. Reid, and Planting for Butterflies, by L. Noyons. These books are specific to luring butterflies back into gardens. And Butterflies of the Western Cape describes when and where butterflies fly, what their larvae and pupae look like and which food plants their larvae need in order to survive. The aim is to encourage readers to look beyond the confines of their own gardens, and to extend their interest in nature in general, and in butterflies in particular, into waysides, parks, commons and other natural and semi natural habitats in their own neighbourhood, and anywhere in the Western Cape and its hinterland.

These habitats, even if man-made or controlled, constitute an integral part of the environment or ecosystem that we share with so many creatures, big and small. Our gardens, waysides, waste grounds, green areas, play and sports grounds all form a vital link between suburbia and the larger areas of natural habitat by providing green corridors for food and shelter through which many animals can move freely, and in which they are able to survive and even reproduce.

Within these corridors, a healthy plant population maintains the balance of life; invertebrates feed on plants and, in turn, serve as food for small vertebrates such as amphibians, reptiles and birds; these, in turn, provide food for larger predators and so on and so forth. People who enjoy nature are generally happy people. In Butterflies of the Western Cape, we hope to inspire the reader to take an active interest in nature, and to enjoy the benefit of a lush garden and the wildlife that is attracted to it and, ultimately, to involve the reader in the conservation of the Western Cape's flora and fauna.

The rewards of butterfly-watching: It is impossible to comprehend nature in all its diversity, but many of its secrets are revealed in the simple ways of the lives of butterflies. Butterflies are nature's flying jewels. They are always around us, and much satisfaction can be gained from watching them, trying to understand their behaviour, their life cycles, and the way in which they interact with other insects and predators. Because of their aesthetic value, diversity and relative abundance, butterflies are among the best-known insects in the world. In South Africa, too, they have been widely collected, studied, named and classified, at the same time offering plenty of scope for further investigation.

It is, however, not the purpose of this guide to delve into the scientific facts that surround butterflies, but rather to make the insects more approachable to the naturalist, and to enhance the layman's appreciation and love for nature - a love, it is hoped, that will culminate in a strong desire to protect the environment and pass on that knowledge and love to others, to our children and grandchildren. Only knowledge can ensure that future generations become successful custodians of their most important asset - their natural heritage. […]

This is an extract from the book: Butterflies of the Western Cape, by A.J.M. Claassens.

Butterflies of the Western Cape

Butterflies of the Western Cape is an informative, user-friendly guide that assists gardeners and nature lovers alike.

Butterflies of the Cape Peninsula

Butterflies of the Cape Peninsula is a comprehensive field guide to all the butterflies of South Africa, with over 280 individual photographs.

For easy identification in the field this comprehencive field guide features all of South Africa’s more than 660 butterfly species.

First Field Guide to Butterflies and Moths of Southern Africa

First Field Guide to Butterflies and Moths of Southern Africa introduces to the more common moth and butterfly groups that occur in the southern African region.