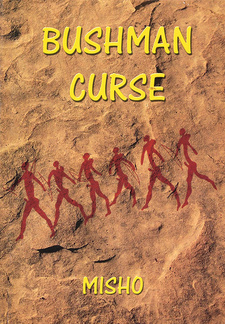 Author Mihail Mihaylov (Misho) heard this story from the bushmen while he was hunting in the Kalahari Desert, north-east of the town of Gobabis. His Namibia novel 'Bushman Curse' is based upon this story.

[...] In the past two days he had had little water to drink and hardly anything to eat. He was afraid that his supplies would run out before he returned home, but he was not disheartened. His father had told him there was a water spring somewhere in this area and if there was water, there had to be animals around. He believed that sooner or later he would find them and he would surely knock one down to sate his hunger. Then he would find the brook and fill his ostrich eggshell with fresh water. He tried to fall asleep to save his energy and strength, but the thought that the brook may have dried out haunted him. Finally, he managed to dispel his fears and dozed off. He dreamed of rain, summer rain - warm and gentle. He could hear the song of birds and the thud of hoofs. He smiled happily, but as soon as he opened his eyes, the rain and the song vanished. !Guge closed his eyes, hoping for the rain and song to come back, but alas! He remained like that - with his eyes closed - for a long time, but could feel no rain, could hear no song of birds. Yet, he heard the thud of hoofs again. He dared not open his eyes for fear that the thumping would disappear. It sounded real - a few short steps of a wild animal, followed by silence, and then a few more treads. It was coming from the ground in which he had buried his head. Puzzled, the hunter could no longer keep his eyes closed. As soon as he opened them the stamping disappeared. Feeling disappointed, he forced down his eyelids, and oddiy enough, the stamping could be heard again. He could hear it quite clearly, /vs if some invisible animal was walking right around him. He thought that either he was going insane because of the heat, his thirst and his hunger, or some evil spirits were jeering at him. This time he opened his eyes hoping to banish the persistent clatter of hoofs, but it continued to echo in his mind. He rose and anxiously surveyed the desert. Only twenty feet to his left there stood a huge oryx. Sensing the movement of the hunter, the animal peered at him inquisitively. !Guge had seen numerous oryx, yet none had been as big and as beautiful as this one - like a deity. Its horns were longer than the longest Bushman spear, its skin was golden brown, and its eyes - large and bright, like black tourmalines. The Bushman thought he was dreaming and closed his eyes yet again. The oryx disappeared in an instant. He opened them - and there it was, lowering above him like a giraffe. He realised it was not a dream. His hunter's passion took hold of him and cold shivers went down his spine. He was all gooseflesh. His heart was thumping. Wild blood rushed to his face and dimmed his eyes. Never before had he felt such an excitement - stronger than a storm. He knew he had to pull himself together and temper the storm if he were not to drive the animal away. He froze. That was something he was good at. He got control of his breathing and froze as he had risen. He looked straight into the eyes of the oryx trying to guess its mood. [...]

This is an excerpt from the novel Bushman curse, by Misho.

Bushman curse is a hunting novel based on a true story that took place in Northern Namibia.

Along the Hunter's Path

A monumental, passionate work dealing with thoughts and hunting experiences in Namibia and other parts of Africa