Bullies, Beasts and Beauties, by Sylvia Schlettwein and Isabella Morris 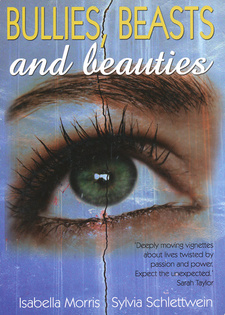 This collection of short stories features stories from Sylvia Schlettwein and Isabella Morris. Each one deals with an aspect of cruelty inflicted by Bullies, Beasts and Beauties on someone undeserving.

Katja had been standing in front of Water Post Windhoek East since the cool hours of early morning, waiting for the young German in camouflage uniform, chewing biltong behind the electric fence, to call out her number. It was now almost midday. Katja had forgotten to bring along a hat, and her scalp burnt under the sun and itched with sweat. She could feel blisters forming on her lips that became more and more sore with her licking. The chip card with the number 35 (her birth year) on it felt slippery in her hand and cut into her palm. She could hardly see her hurting feet under her swollen belly where the baby kicked as though it was also getting impatient. Why did it always have to take so long? Surely the Germans could find a more time-effective way to hand out the water rations? 'Number 103!' The bearded man next to her with an antique farmer's floppy hat mumbled something to his tame jackal. The animal got up and followed his master to the gate. The man presented his chip card, which the young soldier at the gate swiped over a bracelet on his left arm. The gate opened and, after man and jackal had squeezed through, it closed behind them with a buzzing sound. Katja noticed that the jackal was restless. It could probably smell the biltong in the soldier's hand. She wondered whether dogs, domestic animals which people had kept before the Big Bang, would have displayed a similar reaction to the smell of meat. People said that dogs were in many ways similar to jackals. Granny Carla had often spoken about dogs, 'Ah, my dogs. Such lovely animals, faithful until death do us part. Not cunning and false like these bloody jackals.' Then Granny would sigh and hiss towards the pet jackal, 'That's the way it is, Sammy, isn't it?' Sammy would look at her with contempt and howl in the direction of the dry riverbed, from where his wild brothers would answer, and Granny would talk to herself in her strange lingo. 'Yeah, yeah, we were too greedy. Everything was lekker. The black and white farmers had finally stopped beating each other up, we were finally one nation. But then we had to have our cake and eat it and let them dump their rubbish in the Namib. And that exploded in our faces so nicely! We mos asked for it!' And then she usually cried for her husband, two of her three children, all her brothers and sisters, her parents, many relatives, her best friend, her dogs, the animals, the bush, the Welwitschia, Windhoek. The desert was now everywhere. One of 5,000 survivors, she had wanted to convince her grandchildren that the country had once actually been inhabited by living organisms other than just jackals, oryx, roaches, haak-en-steek shrubs and aloes. She was the one who told stories of holidays in Swakopmund, journeys into Kaokoveld, rock engravings and hikes in the Erongo. One who knew and used words and expressions like braai, shebeen, babalas, pad, Botsotso, Independence, redistribution of land, affirmative action, farmers 'midnight, rainy season [...]

This is an excerpt from the book: Bullies, Beasts and Beauties, by Sylvia Schlettwein and Isabella Morris.

Bullies, Beasts and Beauties is a rich read, full of drama, malice and pathos short stories from Namibia and South Africa.

Many Namibian authors have contributed to the book Every December. Namibian Christmas: Stories, Reflections, Poems.

The content of the novel The Kupferberg Mining Company is fictious, interwoven with facts, rumours and legends.

Compelling thesis, hard-hitting, thoughtful analysis of South Africa's past, present and future, a sobering assessment of where we stand today, and where we need to go.