Brothers in Arms: Hollanders in the Anglo-Boer War, by Chris Schoeman. 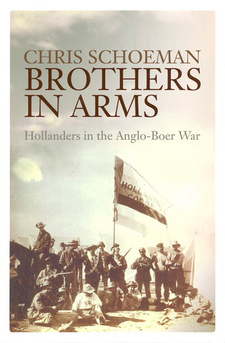 In his book 'Brothers in Arms', Chris Schoeman documents the trials and tribulations of the volunteers coming from Holland (Hollanders) to support the Boers in the Anglo-Boer War.

In February 1881, the Boers regained their independence from the British Empire with a resounding victory at the Battle of Majuba Hill. It was a humiliating defeat for Britain and signalled the end of the First Anglo-Boer War of 1880-1881. Since then, the people of the Netherlands (more commonly known as 'Hollanders') had felt an increasing solidarity with their Dutch-speaking descendants in South Africa. Together they were a stamverwante volk (literally a nation of brothers and sisters). This sense of kinsmanship found expression in the formation of the Nederlandsche-Zuid-Afrikaansche Vereniging, which played a significant role in providing material and moral assistance to the Zuid-Afrikaansche Republiek (ZAR), also called the Transvaal, and the Republic of the Orange Free State during the Second Anglo-Boer War of 1899-1902. When the war broke out, public opinion in the Netherlands was clearly on the side of the Boers. Queen Wilhelmina1 expressed her bonds of friendship ('banden van vriendschap') and consanguinity ('stamverwantschap') with the Boers in letters, and tried in vain to dissuade Britain's Queen Victoria from going to war. The Dutch government, however, was more reserved towards the Boer cause, but nevertheless the people continued to strongly sympathise with the republics. When the British confiscated part of the load aboard the Dutch cruiser Maria in Durban on 29 October 1899, and later when a Dutch ambulance unit was arrested for carrying letters from Boer women to their relatives in the field, the Hollanders were outraged. Anti-British feeling reached a climax in August 1900 when the commander of the British forces in South Africa, Field Marshal Lord Roberts, expelled all employees of the Nederlandsch-Zuid-Afrikaansche Spoorweg Maat-schappij and their families from the Transvaal. One individual who actively championed the Boer cause in public was the great Boer sympathiser Hermanus Jacob Kiewiet de Jonge. Born in Groningen in the Netherlands, he obtained a doctorate from the University of Groningen in 1888, and ten years later helped found the Algemeen-Neder-lands Verbond (ANV). On 27 October 1899, he suggested to Dr Willem Johannes Leyds, the ZAR's Special Envoy and Minister Plenipotentiary in Brussels, that an ANV press office be established at his house in Dordrecht, South Holland. During the war, it supplied the international press with information and influenced public opinion in favour of the Boers, publishing numerous pamphlets, one of which, Een eeuw van onrecht, became very well known. In Flanders (Flemish Belgium), figures such as the Belgian writer Charles Polydore ToF de Mont, Frans Reinhard and the Flemish academic Hippoliet Meert held key positions in the Tweede Boerenbeweging in Antwerp, Brussels and Ghent respectively. A significant contribution from the Tweede Boerenbeweging was undoubtedly its organisation of aid for the Belgian Red Cross ambulance that went to South Africa to assist in the war effort. The Flemish as a nation expressed their sympathy for the Boers in all kinds of ways - through song, the naming of taverns and streets after prominent people and places in the Transvaal, and the establishment of more than seventy societies. A number of Flemish organisations founded in the aforementioned cities would later form the backbone of the Flemish Boerencomité, which also provided assistance to the Boers during the war. Nicolaas Theelen, publisher and editor of the weekly newspaper Het Algemeen Belang der Provincie Limburgy actively drummed up support for the Boers in Belgian Limburg. In late 1901, he organised promotional visits by a certain Hendrik Louw and one of the Dutch volunteers who had been with the Boers in the field, Cornelis Plokhooij, who later recounted his experiences with the Boers in Met den Mauser: Persoonlijke Ervaringen in den Zuid-Afrikaanschen Oorlog. Even Dutch communities within the United States sympathised with the Boer cause. Pro-Boer meetings were held in Grand Rapids and Chicago, and societies formed to collect funds for the Boers in South Africa. [...]

This is an excerpt from the book: Brothers in Arms: Hollanders in the Anglo-Boer War, by Chris Schoeman.