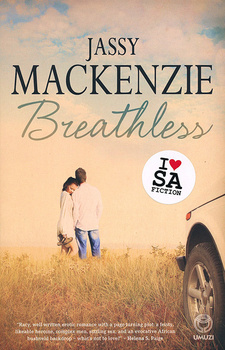 The first chapter of Jassy Mackenzie's romance novel, Breathless, starts with Erin falling into the river, and she describes the feeling of drowning, and the memories triggered by the sensation.

[...] We'd been in bed at the time, Vince and me, in his elegant SoHo loft apartment. It was a few months ago, soon after we'd come back from honeymoon. We'd had a fight the previous night and he'd gone to bed silent and angry. When I'd awoken the next morning to find his fingers tracing the curve of my breast, I'd shivered in delight at the intimacy of his touch, and known I was forgiven. 'So,' Vince had said, his voice soft, 'what do you fantasise about sexually, Erin? Tell me. I want to know. Give me your favourite fantasy. Your wildest one.' The question had taken me by surprise. What could I think of? How could I impress Vince with my answer? 'My fantasy?' I'd repeated, playing for time, my brain muzzy from sleep and confusion and desire. His fingertips were circling my hardening nipple now. He pinched it gently and I gasped. 'Let me think ... It's ... it's making love in water.' The minute I voiced it, I knew it was true. I pictured us in a clear lake somewhere, sun dancing on its surface. I imagined the flow of water against my naked skin as I waded towards him, wrapping my arms around his lean, toned body. He would smooth his hands down my back, caressing the curves of my buttocks as we kissed, his tongue sliding into my mouth. He'd hold me close to him, and as we moved out into the depths, our bodies would grow lighter, buoyed up by the rippling around us ... My thoughts had been interrupted by Vince's laugh. In water?' he'd asked. 'That's not very original. I expected you to come up with something more imaginative than that, babe.' The warm friction of his tongue on my nipple had taken the sting out of his words ... almost. 'I was thinking of something much more adventurous,' he had said. 'Are you up for it?' - 'Of course,' I'd agreed quickly, hoping enthusiasm would make up for my own lack of imagination. 'Touch me while I tell you.' He guided my hand down and I closed my fingers around his shaft, which was fully erect and felt warm. I stroked him, in the way he'd showed me he liked, while he whispered in my ear, I want us to go to the couch on the balcony, and have a quickie there. It's getting light now, so there's the risk somebody might see us. That's what makes it exciting. Shall we, Erin?' Private enough? Well, I could only hope none of the residents with a view of our sixteenth-floor balcony were early risers. It was difficult to say no to my husband though; he usually got his way, as he did that time. I still thought about my fantasy after that. Sometimes I would dream about it. On waking, my mind would be filled with sensual coolness, the remembered softness of an intimate touch, the glimmer of sunlight on skin. And I hoped that one day, when we travelled out of the city to an exotic foreign location, it might happen. At the time of the accident I was on my way to the Kruger Park in South Africa. My husband and I were driving in convoy, although by then his rented Land Rover was a good few miles ahead. I was in the passenger seat of the Toyota, while Bulewi, my driver, who must have been all of nineteen years old, clutched the steering wheel and peered anxiously through the mud-spattered windscreen. [...]

This is an excerpt from the romance novel: Breathless, by Jassy Mackenzie.

Folly is readable and unusual boy-meets-girl novel, an entertaining story filled with suspense and humour.