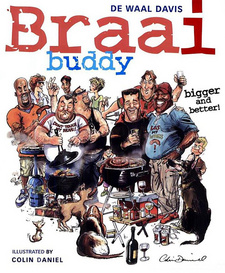 Out of many braai topics, buddy De Waal Davis explains how to prepare, handle and use marinades for preparing meat for braaiing.

Marinades are used to moisten and to impart a particular flavour into the meat. The difference between marinades, bastes and sauces: marinades go into the meat, bastes go onto the meat, and sauces go with the meat. Remove the marinated meat from the fridge the night before cooking (meat or fish should be at room temperature before braaiing). Whether or not acid-based marinades actually tenderize the meat is a contentious issue among cooks and chefs. To be on the safe side, always buy the best and most tender cut of meat that you can afford. Certain ingredients, such as pineapple, papaw, papinos, buttermilk and yoghurt contain enzymes that definitely do break down the cellular structure of the meat thus tenderizing it slightly, but once again always buy the best grades to ensure tenderness. Oil is used in a marinade mainly to moisten dry cuts of meat such as fillet, steak or pork fillet. When using fatty cuts of meat it is an unnecessary ingredient. Allow most of the marinade to drip off the meat before placing on the grid, as those with a high oil content will flame if braaiing over very hot coals. When marinating chicken, use a skewer to pierce the flesh in several places to enable the flavour to penetrate. Skinning the chicken will improve penetration. Some cooks suggest heating marinade and using it as a sauce when the cooking is completed. This should only be done when the oil content of the marinade is minimal, otherwise have plenty of toilet paper and a vacant toilet on hand. If you use the marinade as a sauce, remember to bring it to the boil first. If you want to tenderize large cuts of red meat, including game, without imparting any flavour into the meat, buttermilk, yoghurt papaw or papaw leaves can be used. Soak the meat in one of the above or wrap In the leaves for 3 days. Wipe all the buttermilk, yoghurt or papaw off the meat using paper towels, then season or baste with Basic basting mix (page 30) mixed with fresh lemon juice. Most marinades are uncooked and should not be used as sauces, unless instructed otherwise. Larger cuts, such as roasts, legs, shoulders and flank, should be marinated for three days, turning every 12 hours and kept refrigerated during the process. These cuts should be fully immersed in the marinade. Tender cuts can be marinated for 2-4 hours, turning often to ensure a uniform coating. For best results, fully immerse meat poultry or fish in marinade, rather than just coating it. Marinade ingredients can be mixed or combined In the following ways: blended in a food processor, shaken vigorously in a bottle or beaten with a whisk or an eggbeater. When marinating large cuts of meat simply use a plastic shopping or carrier bag if you don't have a large enough bowl. Place the meat and marinade in the bag, tie the handles into a knot, shake and refrigerate. [...]

This is an excerpt from the cookbbok: Braai Buddy, by De Waal Davis.

On the Coals is an innovative new collection of South African braai recipes and ideas for the keen outdoor cook.

Plenty hints and tips to braai chicken, fish and various cuts of meat