Braai Buddy 2. Tips for the host, by De Waal Davis and Colin Daniel 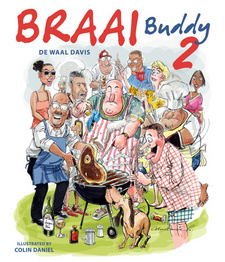 Braai Buddy 2. Tips for the host, by De Waal Davis and Colin Daniel.

Not only braai recipes but the golden rules of good and right behaviour while attending a braai, is part of De Waal Davis' Braai Buddy 2.

Braai Buddy 2: Tips for the host

The taboo list needs to be decided first. This is of the utmost importance as one would not want to have one's invited guests depart due to the arrival of well-connected people who have been guilty of nefarious activities. For this reason, politicians need to be avoided at all cost, particularly those with black BMWs and bodyguards. Beware of Australians who don't have a generic criminal record; they are not the real thing, but are probably English coaches looking for tips on how to play rugby. Beware of New Zealanders who smile warmly and broadly (this is not normal behaviour), as they could either have rabies or might just have beaten the Springboks; both are unacceptable. Rumour has it that the All Black management team is receiving instructions on how to perform the Heimlich manoeuvre, just in case their team chokes during a world cup again and again and again. The Haka should be banned. It is an embarrassment to rugby. Men dancing on the rugby field is a no-go zone, we have good-looking cheerleaders to do that. The French are OK as long as they stick to cooking, as they have a tendency to grab any ball on the field. Vegans and vegetarians have no place at a braai, even if they bring their own carrot. Consultants, previously labelled reps or salesmen, who pretend to be off-duty, but are what they call 'focused'. Other terms for this include 'networking', 'lateral thinking' or 'thinking out of the box'. Most of them don't know where or what the box is. These vultures may be easily identified by the following method; introduce yourself and if you are presented with a business card before you have a chance to shake hands, beware, you are dealing with a seasoned professional. Vuvuzelas are banned as they interfere with conversation and constructive criticism of the referee during rugby matches. If you use an MSG-drenched flavour enhancer masquerading behind a trade name, throw this book away. […]

This is an excerpt from the book: Braai Buddy 2, by De Waal Davis and Colin Daniel.