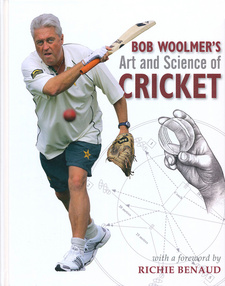 As a team Bob Woolmer, Tim Noakes and Helen Moffett worked on this manual on art and science of Cricket for many years. The script was finished only six weeks before Bob Woolmer's death in 2007.

Bob Woolmer began life with a cricket bat in his crib; and he died in the service of cricket, on 18 March 2007, at the Cricket World Cup in the West Indies. His sudden death, most probably of heart failure, caused a cloud of speculation and confusion that for a few months threatened to veil Bob's gigantic contribution to the game to which he had given his life. He had just finished this book, a substantial work that contains much of what he had learnt, pondered and learnt afresh about cricket. It now serves as his legacy; and his surviving co-authors, and the many helpers who worked on it, hope that it reflects, in some measure, the depth and breadth of Bob's wisdom, experience and constantly questioning cricketing mind. Bob's favourite saying to those dealing with a sporting defeat was, 'It's only a game. Nobody has died.' A modest, transparent and humble man, he would have been overwhelmed by the global outpouring of sentiment at his death.

I had my first proper sighting of Bob in the early 1970s, when he was starting to make an impression in the Kent team, and 1 was working with BBC Television. He was an elegant player, under the influence of Colin Cowdrey, and he impressed me as being a good thinker on the game. There was no better example of this than in 1974, when, in the semi-final of the Gillette Cup, he bowled his 12 oxers for 22, and then steered Kent to victory with 18 not out in a pulsating finish, in the final at Lord's three weeks later, it was Bob who bowled magnificently, and then shared the tense winning partnership with Alan Knott. He confirmed my impression of his ability and his thinking in the years that followed, and when he played for the World XI in World Series Cricket, he was already thinking ahead into the area of coaching. Captains and coaches, good ones that is, are always a couple of overs ahead of the play; otherwise they find themselves trailing the opposition. Bob's habit of 'thinking cricket' is one of the reasons this is a coaching book different from all others. It is essential to play your cricket in common-sense fashion. It follows that using a common-sense approach to coaching will provide a wonderful combination. On my first tour of England in 1953,1 received the best simple advice from Bill O'Reilly as to the manner in which I should completely revise my bowling technique. It successfully changed my bowling career. So I believe that in the teaching of players, the key lies in watching a man play, detecting his mistakes, and having the ability to correct those mistakes, one at a time. Never forget the simple things. In Bob's book there is much to ponder about mental skills and strengths, and it comes across that a player must use, rather than waste, his talent. To have a talent that is rarely used is a sad legacy in life; fortunately this was not true of Bob Woolmer's life. He was able to use his cricketing talents to the full, and his book is proof of this. I hope it is a great success.

This is an excerpt from the book: Bob Woolmer's Art & Science of Cricket, by Bob Woolmer, Tim Noakes and Helen Moffett.

The Cape Malay Cookbook is a practical guide designed to enable anyone to produce authentic and delicious Cape Malay food.