Birth. The Conspiracy to Stop the '94 Election, by Peter Harris 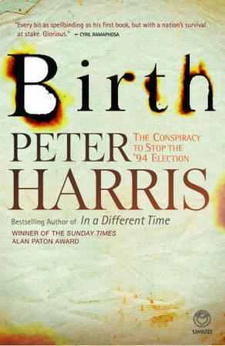 Peter Harris describes the complexities and mysteries of new South Africa's birth in Birth: The Conspiracy to Stop the ‘94 Election.

It is 1987. It is the year the conflict that started in Natal lights a fire which cannot be extinguished. Aided by covert groupings in the South African Police Force, the Inkatha Freedom Party wage a war on the anc and its supporters which threatens to reduce whole swathes of the country to a wasteland. In those early days of the violence outside Pietermaritzburg, my colleagues Halton Cheadle and Clive Plasket and I bring successive Supreme Court applications in an attempt to interdict Inkatha from carrying out acts of violence. In this we are instructed by Jay Naidoo and Alec Erwin of Cosatu (the Congress of South African Trade Unions), the local churches and certain community associations. After eleven court interdicts are obtained, we hope that the violence will stop. It does not. It continues through 1988, 1989 into 1990. It continues through the unbanning of the political movements, the release of political prisoners, the release of Nelson Mandela. The death toll mounts. It is Saturday, 14 July 1990. Chief Mangosuthu Buthelezi, the leader of Inkatha, formally launches the organisation as a national political party. The cultural organisation that had been Inkatha, with its heartland in Natal and KwaZulu, quickly moves into other regions of the country. Busloads of Zulus from KwaZulu invade the hostels in the townships around Johannesburg, evicting non-Zulus. The real objective of the expansion is, of course, to establish political bases in the Transvaal, the industrial engine of the country's economy Inkatha do not waste time and barely a week after its launch, fighting breaks out between them and anc supporters in Sebokeng, a township in the Vaal Triangle. The result: more than thirty dead. It is the beginning of the nightmare. Using the hostels as a springboard, attacks are launched into the nearby communities: massacres of innocent train commuters by gangs of men in balaclavas, drive-by shootings, bombs in bars, attacks on clubs and commuters at taxi ranks, assassinations and random murder, women and children included. In 1990, there is a hundred and sixty-three per cent increase in political violence, a magnification of murder on an unprecedented scale. It is the worst year of political violence in modern South African history. Three thousand six hundred and ninety-three people die. It is in this context of looming civil war, murder and social dislocation that trade unions, businesses and churches hold discussions to address the deteriorating situation. The initial discussions take place in an upstairs private room at the Turn and Tender Steakhouse in Braamfontein, Cosatu's meeting place of choice for highly confidential discussions. It is there that the debates go on long into the night. Jay and Jayendra Naidoo of Cosatu, Halton Cheadle and Fink Haysom from Cheadle Thompson & Haysom, and Andre Lamprecht from Barlow Rand lead the discourse. The deliberations are assisted by the liquid largesse of Mervyn, the likeable owner of the restaurant. As the hours tick by, he keeps the drinks coming. The discussions are premised on the recognition that the Nationalist government is either unable or unwilling to provide the necessary security that will ensure a relatively stable transition to democracy. A peace accord is called for. The premise of such an accord is based on the principle that everyone will want to endorse peace or at least be seen to endorse it. Which leader will stand up and not want to pledge to reduce the violence? Once committed, it is reasoned, the rest will follow and the parties will be bound more tightly. […]

This is an excerpt from the book: Birth. The Conspiracy to Stop the '94 Election, by Peter Harris.

Birth. The Conspiracy to Stop the '94 Election

Birth, The Conspiracy to Stop the '94 Election is about a vulnerable moment. It is about a nation staring into the abyss as it steps out to determine its future.