Baobabs of the World, by Andry Petignat and Louise Jasper 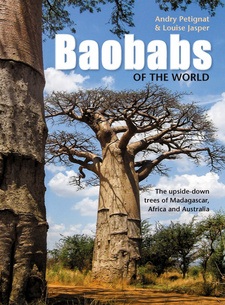 Andry Petignat's and Louise Jasper's Baobabs of the World comprises a guide to each of the eight baobab species, including a botanical description, details of their habitat, distribution and principal uses, accompanied by clear images and line drawings of the leaves, flowers, fruits and growth habit of each species.

Madagascar drifted away from Africa around 160 million years ago, during the breakup of the prehistoric supercontinent Gondwanaland. Since about 90 million years ago, the island has remained separate from other landmasses, allowing its flora and fauna to evolve and differentiate in near isolation. Madagascar has therefore inherited an incredibly rich and divergent biodiversity, with thousands of species that are found nowhere else on Earth. Of its 11,031 native plant species, 82% are endemic to the island, along with 100% of its non-flying mammals, 99% of frogs, 92% of reptiles, 65% of freshwater fishes and 52% of birds. At higher taxonomic levels Madagascar's endemism is even more impressive; with 24 endemic families of plant and animal (not including invertebrates), the island constitutes of one the world's 12 centres of megadiversity. Its biodiversity plays a fundamental role in the country's economic development and human well-being, but sadly its natural ecosystems are characterized by an extreme fragility, and habitat degradation is taking place at an increasingly alarming rate. Baobabs illustrate the spectacular diversity, endemism and vulnerability of the Malagasy flora. Madagascar is the centre of baobab diversity: of the world's eight species, six are unique to the island (Adansonia grandidieri, A. madagascariensis, A. perrieri, A. rubrostipa, A. suarezensis and A. za). Three of these species are considered to be Endangered by the IUCN, and a further two are Near Threatened, due to extensive habitat loss, indicating the urgent need for conservation action. In contrast, the African Baobab (A. digitata) is found throughout the semi-arid regions of sub-Saharan Africa and has been widely planted in tropical countries around the world, including Haiti, Venezuela, India, Java and Madagascar. The eighth species, the Boab (A. gregorii), grows in the drylands of northwestern Australia.

BOTANICAL CLASSIFICATION
Baobabs (genus Adansonia) were formerly placed within the family Bombacaceae. However, molecular studies revealed that they should be reassigned to the subfamily Bombacoideae within the huge cosmopolitan mallow family, Malvaceae. The Bombacoideae contains 27 genera and about 250 species, the majority of which occur in the New World tropics. These include some economically important species such as the South American Balsa (Ochroma pyramidale), which yields one of the world's softest commercially traded hardwoods (used in model-making, aircraft and film props), and the Kapok (Ceiba pentandra), whose long fruits produce cotton-like fibres used as stuffing material. Carolus Linnaeus (1 707-1778) named the genus Adansonia in honour of the French botanist and explorer Michel Adanson (1727-1806), following the suggestion of Bernard de Jussieu (1699-1777). Although the fruit of the African Baobab (A. digitata) had long been known to European botanists, Adanson was the first to formally describe the tree, which he referred to as the 'calabash tree', in 1757. He based his description on information gathered during an exploratory voyage to Senegal while working for the French East India Company. He also collected a prodigious amount of information on the plants, animals, commerce and languages of Senegal. Although the common name for trees of the genus Adansonia is baobab, this word is not actually derived from any African or Malagasy dialect. This name first appeared in 1592, spelled bahobab, in De Plantis Aegypti Liber, a book of Egyptian flora by the Italian doctor and botanist Prosper Alpino (1553-1617). In this volume, Alpino described fruits of A. digitata that were sold on the markets of Cairo under the name bahobab, which was likely derived from the Arabic bu hibab meaning 'many-seeded fruit'. [...]

This is an excerpt from Baobabs of the World, by Andry Petignat and Louise Jasper.

Baobabs of the World

A photographic masterpiece, this beautiful book is a fitting tribute to the baobab of the world.