Back to Angola, by Paul Morris 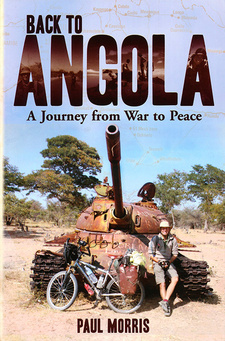 Paul Morris was in the bush war of Angola in 1987. A quarter century later, he returned and went on a 1500-kilometre cycle trip from Cuito Cuanavale in Angola to Tsumeb in Namibia.

Setting out from Cuito

I'm so full of war and feelings I can't explain. Feelings that swirl and suck like the sea in a rock pool on an incoming tide. Tears narrow my throat and I swallow hard because I'm with people I don't know. I'd swallow harder still if I did know them. This place is thick with the past, layers of it piled atop the sand on the ridge. It rusts away slowly in its armoured wrecks and in my soul. I am deep in my own history; it stares boldly at me and I can't look away. I'm nervous and reluctant to start the ride. I fiddle with kit and pack slowly, strapping my tent, sleeping bag and sleeping mat to the bicycle's carrier. I'm in a strange in-between place: I want to get going, to feel the road moving under my wheels, yet I'm afraid of what it might reveal. This is Angola, after all. I had to lie to get a visa: No, I've never visited Angola before. I've never had a visa application rejected. But I have visited before. I didn't need a visa then because I was riding in eighteen tons of armour, part of a large and formidable military force. The Angolans did refuse me entry: somewhere on the Lomba River I was met by their army, which tried to stop me and several thousand like me. But I don't mention any of this on the visa application form. Adrenaline is trickling lightly through my veins and a cold knot of anxiety is tied in my gut. I know I'll be all right; I know that the beginnings of journeys like this are always fraught with fears, real and imagined. My mouth was dry when I forced down my Jungle Oats breakfast, and it's dry now as my nervous fingers clumsily make adjustments to my load. I'm heading into the unknown. I have no idea where I'll sleep tonight. I might have to sleep in the bush, but I don't know if I'll be able to find a hidden place that's not in a minefield. I might have to ask for permission to camp on someone's land, but I don't speak Portuguese. How will they react to me? Will they understand me? I'll be fine, I reassure myself. Lack of a common language seldom stops two willing people from communicating. A woman called Santa has hosted us during our short stay in Cuito Cuanavale, and I look around her homestead one last time. Her house is a two-room breeze-block structure set back from the road. Between the house and the road is a gravel patch the size of a football field, and to the left is a round thatch-and-stick-frame structure. This is where a young San woman lights a fire to cook her dinner of beans. Then there are three smaller buildings. The first houses the San woman, whose age I find impossible to guess, but she must be in her late teens or early twenties. She has a baby, not yet walking, and there are two other children of about eleven or twelve, a boy and a girl. Aside from the mother and baby, I'm not clear on the relationship between the people who live here, and I'm too preoccupied with my own intense emotions to figure them out. My arrival in Angola, being in Cuito Cuanavale and contemplating what the road might hold for me is producing feelings that threaten to overwhelm me. To the left of the house is a large water tank, which is filled up by a tanker from time to time. It looks like the kind of thing that would have been mounted on the back of a Kwevoel logistics vehicle. [...]

This is an excerpt from the book: Back to Angola, by Paul Morris.

This travel report is partly about Paul Morris's experiences as a soldier of the SADF in Angola in 1987 and his travel back to Angola in 2012.

The story of the Buffalo Soldiers of the 32-Battalion from 1975 to 1993, South Africa's most elite and controversial infantry unit.

Agent 407 is a riveting and true South African spy story set in the last years of the apartheid system.

From afkak to bosbefok - Voices of South African National Servicemen

The War Diaries of André Dennison

The War Diaries of André Dennison are a remarkable and unique record of low intensity warfare in the African bush.

Conflicting Missions, Havana, Washington, Pretoria, is about Havana policy in Africa and of its escalating clash with US policy with the South African Defence Force in Angola.