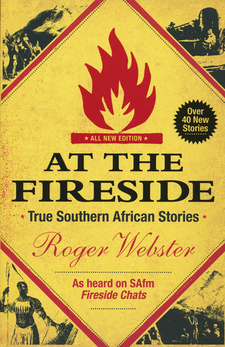 Roger Webster published his first volume of At the Fireside stories in 2001. It became an overnight bestseller and he went on to write three more books filled with magnificent stories from southern African.

If you travel down the N12 highway from Johannesburg en route to Kimberley, you will come to a small kopje to the left, and on top of it is a monument to Danie Theron. I remember as a child asking my parents: 'Who was this Danie Theron?' and was told that he was somebody who had died in the Anglo-Boer War. Later, as my thirst for knowledge of my country grew keener and my quest for history more acute, I dug up his story. So, for those of you who come across this strangely shaped monument opposite Anglo American s Mponeng Mine and wonder about the story behind it is, here it is. In 1893 Danie Theron was a junior in a successful legal practice in the town of Krugersdorp (now known as Mogale City) - a serious young man. just starting out in life. There he met a young woman from Eikenhot named Johanna Neethling with whom lie fell in love and whom lie had every intention of marrying. There were obstacles to the courtship, particularly distance. His only means of transport was a bicycle and every weekend Danie would cycle the 26 miles - about 40 kilometres - to Eikenhof to be with her. Then, on the Sunday, he would cycle 40 kilometres back to Krugersdorp. It is quite amazing how there are no boundaries for a young man in love. Then, during the latter part of the winter of 1898, Johanna fell ill with influenza. She did not take the correct care of herself; the flu quickly turned into pneumonia and on 28 August she was laid to rest in Eikenhof's small cemetery. What made this even more tragic was that her sister Henrietta, who was also suffering from pneumonia, died in the same bed later that day. Danie was shattered at having the love of his life torn so abruptly from him. Some say he never really recovered, and this might go some of the way towards explaining what happened on 5 September 1900, just eight days after the second anniversary of Johanna's death. Almost a year earlier the Second Anglo-Boer War had broken out and among the thousands of citizen-soldiers reporting for duty had been Danie Theron, a staunch Transvaaler who was not willing to see the republic surrender its freedom to anyone on Earth. At first there had been a string of Boer victories. But inevitably the mighty fist of the British Empire started to close around the little republic. By now the sieges of Mafeking and Ladysmith had been lifted and the Boer capitals of Bloemfontein and Pretoria captured, and the war had settled into the grim guerrilla phase which would last for almost two years. Mobile Boer commandos dodged and staged hit-and-run attacks, doggedly pursued by British columns. By this time Danie Theron's was a name to be conjured with. The young lawyer had become a daring scout whose exploits were the stuff of legend. This day he was out on yet another reconnaissance which was why he was on the summit of the kopje with his binoculars, sweeping the area around him for signs of British movement. And then he saw a whole British convoy under Major-General John French marching to Johannesburg along the dirt road on whose bones today's N12 was built. At what exactly went through his mind when he saw the long khaki column we can, of course, only guess. Some of his thoughts were angry ones at the invasion of his country, one could surmise, and perhaps there was a war-weariness in him after so many months of stubborn resistance against a remorselessly unstoppable foe; perhaps also an upwelling of his never-forgotten grief over Johanna. Perhaps it was a combination of all three. Whatever the case, Danie Theron made a fateful decision. He was not going to run away. [...]

This is an excerpt from the book: At the Fireside: True Southern African Stories.