Archaeologically yours. A personal journey into the prehistory of Southern Africa, Namibia, by Beatrice Sandelowsky. 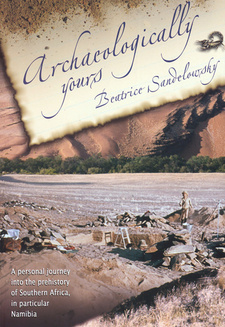 A collage of images taken from Beatrice Sandelowsky's memoires Archaeologically yours: A personal journey into the prehistory of Southern Africa, Namibia.

Beatrice Sandelowsky's memoires, Archaeologically yours. A personal journey into the prehistory of Southern Africa, Namibia, can be recommendwithout reservation to anyone interested in the people of southern Africa and their ancient heritage.

Coming home to South West Africa / Namibia I was eager to get back to Wade, to Windhoek, to another phase in my life in SWA/ Namibia. It was a shock to hear that Dr Steyn was no longer Director at the State Museum in Windhoek. He had been promoted to the Transvaal Museum and his successor was a man I managed to antagonise from the word go. My problems at the State Museum began with the struggle to be re-appointed to the position from which I had been given study leave under Dr Steyn. The civil servants in the Education Department, also responsible for running the museum, wanted to re-instate me as a Primary School teacher in a rural village rather than as an archaeologist at the Museum. Their argument was that the need for teachers was greater than the need for archaeologists. The upper echelon of the civil service in South West Africa consisted almost exclusively of white male Afrikaners who belonged to the clandestine Broederbond. This powerbroking organization was committed to sustaining racist white supremacy in South Africa. The doctrine of Christian National Education ruled supreme at the Afrikaans medium universities where the future leaders were to be educated. Balthasar Vorster had indeed succeeded Hendrik Verwoerd as President of South Africa, as Keith had speculated when we were working on the Nyika Plateau. Also, in 1966, South Africa had lost the case against Ethiopia and Liberia in the International Court of Justice in Den Haag. Now the political hegemony over South West Africa was intensified. An enlightened professional female who was graduating from the University of California in Berkeley - in the news on account of the students' Free Speech Movement, Hippies and Flower Power - was anathema. The private secretary to the Administrator of South West Africa - possibly the most influential person in the government of the time - initiated a discussion I had with him by posing the question: "Of what practical use is all this scientific research you people talk about?" I pointed to the fluorescent bulb over his desk and asked: " Does that light serve any purpose in your opinion?" He frowned and I went on: "Products like that ultimately are the outcome of scientific research." My undiplomatic provocation was answered in a way I might have anticipated: "You just make me angry with stupid arguments that have nothing to do with real life." Luckily the Administrator of South West Africa was a more liberal man and probably responsible for my appointment as archaeologist to the Windhoek State Museum. Wade and I had met him at the Administrator's Christmas party given in Swakopmund every year. The Director of the private Swakopmund Museum, Dr. Alfons Weber, had introduced us to him. As one of the four professional officers on the staff of the State Museum, I was so enthusiastic that I started working two months ahead of the official commencement of my contract. My first self-assigned task was a survey of work done by archaeologists in Namibia to date and a study of the museum collections, followed by drawing up a scheme of work to be embarked upon. The setting and much of the material was very familiar, although four years had passed since I had worked there with Rona MacCalman, who had succeeded the first qualified archaeologist to be appointed by the Government. She had left and I observed a remarkable change in myself. I was amazed at the different light in which I saw the archaeological collections, a light coloured by the knowledge and the experience I had gained in the course of graduate study and the time spent in Malawi. [...]

This is an excerpt from the memoires: Archaeologically yours. A personal journey into the prehistory of Southern Africa, Namibia, by Beatrice Sandelowsky.

Prehistory in the Central Namib Desert

The Tsisab Ravine and other Brandberg Sites (Limited editon: 26 copies)

A visit to the White Lady of the Brandberg

A visit to the White Lady is an introduction to the vast rock painting collection at the Brandberg Mountains in Namibia.

The Rock Paintings of the Upper Brandberg, Vol. V

In the study The Rock Paintings of the Upper Brandberg, Vol V, the focus is on the Naib Gorge (A) and the Northwest.

The Rock Paintings of the Upper Brandberg, Vol IV

In the study The Rock Paintings of the Upper Brandberg, Vol IV , the focus is on the Umuab and Karoab Gorges.