Animals of the Pilanesberg: An Identification Guide, by Burger Cillié, Ulrich Oberprieler and Christo Joubert 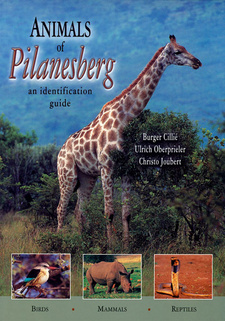 Animals of the Pilanesberg: An Identification Guide, by Burger Cillié, Ulrich Oberprieler and Christo Joubert.

The authors Burger Cillié, Ulrich Oberprieler and Christo Joubert cooperated in order to create an identification guide to the animals of the Pilanesberg.

The Pilanesberg Game Reserve covers an extremely unique area. In geological terms it is well known as a volcanic alkaline ring complex. Furthermore it supports an interesting ecosystem with an extraordinary rich diversity of plant and animal life. The natural weathering of this volcano over thousands of years has resulted in an interesting compositions of cliffs, mountain slopes, gorges, ravines, gullies, valleys and water ways, thereby creating a diverse topography and various soil types. These gave rise to the interesting variety of habitat zones and vegetation communities, which in turn support the unique composition of the park's animal life. Another interesting feature of the Pilanesberg ecosystem results from the fact that it lies on the transition zone between the arid Kalahari thornveld to the west and the moist bushveld towards the east. This causes distributional overlaps of certain species that are not usually found in the same area. Examples are the Impala and Springbok, the Red Hartebeest and Tsessebe, the Pin-tailed and Shaft-tailed Whydahs, Shelly's and Orange River Francolin, the Speckled and White-backed Mousebirds, and many others.

Pilanesberg has been developed into an attractive nature reserve, which is very popular amongst both local and overseas tourists. It boasts the "Big Five", diverse game and other mammal species, as well as an abundant bird life. This, together with a good network of roads and other visitor facilities, make the park a very pleasant wildlife destination. The aim of this guidebook is to introduce the park's unique and diverse animal life to visitors, to assist them in the positive identification of different species; thereby making their visit to the park an interesting and satisfying experience.

Background
Pilanesberg was opened in December 1979. It is one of the largest nature reserves in South Africa and covers a total area of more than 500 square kilometers. In preparation for the opening, the park was fenced with an elephant-proof fence and stocked with indigenous game. This game reintroduction programme, called "Operation Genesis", was the largest animal translocation programme of its kind at the time. Over 7000 animals were moved from other nature reserves all over southern Africa. Up to now 103 mammal species, over 350 bird species, 18 amphibian and 65 reptile species have been recorded in the park.

Geology
Many millions of years ago vast volumes of magma (a volcanic liquid inside the earth) intruded into the older layers of rocks in this area. The magma then cooled down very slowly, thereby forming igneous layers of rock, rich in different minerals: some layers are rich in chromium while others have high concentrations of platinum. These rocks weather easily when exposed to the atmosphere and form the flat topography that surrounds Pilanesberg. This is the so-called "Bushveld Complex". Much later the surface rocks were subject to massive geological stresses, causing zones of weakness (like the Pilanesberg area) where further volcanic activity occurred. A distinct type of magma injected into these zones and formed a certain group of igneous rocks, called alkaline rocks; some volcanic and others intrusive.

More than one volcanic eruption occurred in Pilanesberg. With the first eruption, magma exploded through the Bushveld Complex and broke it into fine fragments. The lava on the surface cooled down rapidly, while deeper layers cooled more slowly, forming intrusive rocks with large crystals, now evident as spectacularly multi-coloured rocks. Each of the magma pulses of subsequent eruptions formed a cone-shaped intrusion around the previous one and solidified before the next eruption. From above these cones look like concentric rings, called ring dykes, with the oldest in the middle. For these reasons Pilanesberg is referred to as an "alkaline ring complex".

Pilanesberg, which is 25km in diameter, is one of the largest single volcanoes of its kind on earth. Its alkaline rocks are rarely found anywhere else. Two minerals are common in these rock namely orthoclase (a feldspar) and nepheline. Pilanesberg's intrusive rocks dominated by orthoclase are called syenites while those dominated by nepheline are called foyaites. […]

This is an extract from the guide: Animals of the Pilanesberg: An Identification Guide, by Burger Cillié, Ulrich Oberprieler and Christo Joubert.

The Mammal Guide of Southern Africa

This pocket bird guide is an essential and practical aid for birders in the bush of Southern Africa.

The Bird Guide of Southern Africa

The Bird Guide of Southern Africa features all southern African birds, except pelagics and vagrants in over 1200 excellent colour photographs.

The Raptor Guide of Southern Africa

The Raptor Guide of Southern Africa describes both diurnal and nocturnal species.

Field Guide to the Animals of the Greater Kruger Park

The Field Guide to the Animals of the Greater Kruger Park introduces the richness of animal life to the visitors of the famous National Park.