Angels of Mercy: Foreign Women in the Anglo-Boer War, by Chris Schoeman 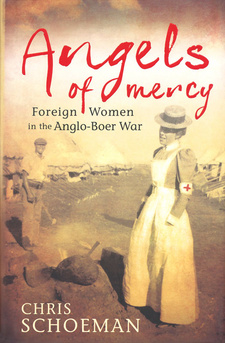 Angels of Mercy tells the story of twelve of brave and helpful foreign women during the Anglo-Boer War. Chris Schoeman has written several books on the history of South Africa.

[...] Anglo-Boer War literature has, somewhat inevitably, focused largely on the men who fought on either side: Boer generals Christiaan de Wet, Koos de la Rey, Louis Botha and Captain Danie Theron, and British military officers Sir Redvers Buller, Lord Roberts and Lord Kitchener. While the lives of prominent women such as Emily Hobhouse, Johanna Brandt, Sarah Raal and Tibbie Steyn have been well documented, many others have been sadly neglected. Apart from Mary Kingsley, the angels of mercy featured in this book were not prominent figures, but they were nonetheless important and influential in their own way. While these were ordinary women with whom we can easily relate, their achievements were extraordinary; and though their experiences and contributions varied, each one of them was compelled by the desire to do something meaningful for her fellow man. It was especially in the spheres of nursing and teaching that foreign women made a significant contribution during the Anglo-Boer War. Yet even prior to that, in the colonial context, there had been a relationship between the drive for female suffrage and the emergent profession of the female nurse; both involved women who were striving for recognition, and who were genuinely concerned with social justice. The war offered women in the colonies an opportunity to contribute both to the national and the imperial cause. The idea of women operating outside of the domestic sphere was, however, still viewed with suspicion, and the matter created much debate throughout the colonies. Nevertheless, the work of the nurses in South Africa demonstrated that not only were women able to operate successfully in the public sphere, but they could do so without losing their femininity as prescribed by society. At the time, there were preconceived notions regarding women, who were expected to be attractive not only in appearance, but also in their manners and speech, and to be mindful at all times of their social position. In spite of the difficult conditions in which women worked during the war, they were expected to continue to fulfil these requirements. At the height of the war, about 300 women teachers from Britain, Canada, Australia and New Zealand were recruited to work in the concentration camps that the British had set up for Boer women and children. Thousands of predominantly lower-middle-class women applied for these teaching posts, and while some were motivated by patriotism, many desired adventure and a better life. The success of the schools they came to teach in raised imperial hopes, somewhat naively, as it turned out, that education could transform the former Boer republics into British territories within one generation. The women featured in Angels of Mercy came from a variety of backgrounds and occupations. Some were authors and adventurers, such as the Belgian socialist Alice Bron, and Mary Kingsley, one of two Englishwomen who died while caring for Boer patients. Others were nursing sisters, such as the Australian Nellie Gould, one of that country's first Boer War nurses, Georgina Pope from Canada, Lisette Hellemans from the Netherlands and Elin Lindblom, a Swede who served with the Scandinavian Ambulance. Some were teachers: Maud Graham from Canada, Margaret Mclnnes from Australia, Hilda Ladley from New Zealand and Wijtske Sijbrandi, who had come from the Netherlands and eventually ended up nursing as well. At times during the war their paths crossed, Wijtske Sijbrandi, Lisette Hellemans, Elin Lindblom and Alice Bron encountered one another in strange circumstances at one point. [...]

This is an excerpt from the book: Angels of Mercy: Foreign Women in the Anglo-Boer War, by Chris Schoeman.

The History of Nursing in Namibia

Agnes van Dyk has diligently researched the history of nursing in Namibia from 1800 to 1996, and come up with a book which most faily reflects the true events