An Overview of Freehold Conservancies in Namibia, by Danica Shaw and Dr. Laurie Marker 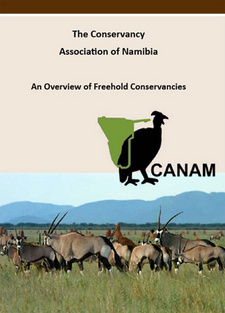 An Overview of Freehold Conservancies in Namibia, by Danica Shaw and Dr. Laurie Marker.

In the introduction to their book, Danica Shaw and Dr. Laurie Marker explain: "A freehold Conservancy in Namibia is a legally protected area of a group of land-occupiers practicing co-operative management based on a sustainable utilization strategy, promotion of the conservation of natural resources and wildlife, and the desire to reinstate the original biodiversity with the basic goal of sharing resources amongst all members"

CANAM definition of a Conservancy

As global awareness becomes increasingly tuned to the condition of the environment, alternative energy, and the effects of global warming, conservationists continue to find innovative methods to protect irreplaceable biodiversity throughout the world. Africa, with its vast natural resources, abundant wildlife and developing nations has provided unique challenges and opportunities to conservation. Conservation policies in Africa have always addressed the diverse environmental and political situations throughout the continent differently. What works in one country or area can be unsuccessful elsewhere. However, today the common approach is to consider both the wildlife and the people when producing conservation action plans. It has become increasingly obvious that the needs of our ever expanding human population come into conflict with the needs of wildlife across the continent. One of the greatest challenges for conservation today is how to best conserve biodiversity while at the same time allowing for critical development goals and the improvement of livelihoods. State protected area management has often been the main focus of government wildlife departments in African countries, with little attention paid to wildlife in other areas. If these populations are ignored, only small isolated wildlife populations confined to national parks and other formally protected areas will remain. Considering that the rrrajority of wildlife lives outside protected areas in most African nations, it has been critical over the past few decades that this disparity in the protection of wildlife be addressed. As a response, much of the conservation efforts outside government protected areas have been taken up by private landowners and non-governmental organisations (NGOs). (see: Conservancy Association of Namibia CANAM).

In Namibia, more than 88% of wildlife occurs outside of national parks. Therefore, conservation in these areas is critical to ensure healthy ecosystems and wildlife numbers. Namibia has a dual land tenure system that provides different opportunities for sustainable land use and conservation. The land outside of state protected areas is categorised into freehold farmlands constituting 43% of the country's total area, while communal farmlands represent 40%. During the past 30 years, both freehold and communal farmers have been granted rights to the utilization of wildlife which has resulted in" wildlife populations increasing throughout the country.

The first change in legislation regarding rights over wildlife occurred in 1967 when private land owners were given conditional rights to utilise wildlife. Huntable or common game species that occurred on private land became the property of the landowner, which suddenly gave these species an economic value to the freehold farmer. The Nature Conservation Ordinance No. 4 of 1975 then followed and provided a framework for consumptive utilisation. Residents on communal land did not obtain rights to wildlife until the Nature Conservation Amendment Act 5 of 1996 granted them rights to use and benefit from wildlife, provided they formed a communal conservancy. [...]

This is an excerpt from the book: An Overview of Freehold Conservancies in Namibia, by Danica Shaw and Dr. Laurie Marker.

An Overview of Freehold Conservancies in Namibia

The Conservancy Association of Namibia (CANAM) gives an detailed overview of freehold conservancies that have been intitiated by the 23 members.

A Guidebook to NamibRand Nature Reserve

This Guidebook to NamibRand Nature Reserve in Namibia enhances the visitor's experience and enjoyment in exploring this unique region.