Ambiguities of witnessing - Law and literature in the time of a truth commission, by Mark Sanders 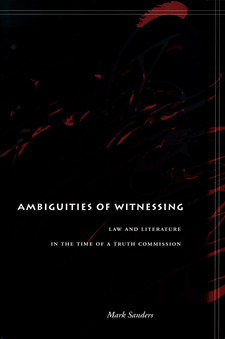 Ambiguities of witnessing - Law and literature in the time of a truth commission, by Mark Sanders. Witwatersrand University Press

The author of Ambiguities of witnessing - Law and literature in the time of a truth commission, Mark Sanders, is Associate Professor of Comparative Literature at New York University.

In William Kentridge's film Ubu Tells the Truth (1997), a network of telecommunication operates as a network of violence. In its eight minutes Ubu Tells the Truth bears witness to how the apartheid state, in its convulsive death throes, sowed destruction far and wide. Telephonic, electronic, and phonographic recording and transmission technologies, benign and felicitous in ordinary use, tortured and killed. When police wound up old field telephones to generate current, their trademark for electrical torture was Motorola. With the death of Bheki Mlangeni, his head blown apart by explosives put in a pair of headphones meant for someone else, his assassins had made Walkman their brand of choice. Kentridge's film flashes us iconic reminders of those and other nodes in these violent networks. Telephones, microphones, and megaphones proliferate, a prisoner is shocked by electric current, a parcel bomb makes its way through the postal system, and, starting out as the tyrant Ubu's line-drawn eye, a camera on a tripod mutates through the artist's animation drawings into a helicopter, a radiogram, and then a gun. Played over television images of the militarization of the South African state as it lashed back against opposition to apartheid, Warrick Sony's sound track recalls the discordant pastiche of radio music, political speeches, and other found sounds of his fringe band, the Kalahari Surfers, from the eighties-as well as the doubling, in the musician's pseudonym, of the police assassin's weapon with the ready-to-hand recording device that he would sometimes use. Telecommunications systems and devices are ubiquitous in Kentridge's films, but in none are they as dangerous as in Ubu Tells the Truth. The technology animated in the film is at once lethal and liberatory. When Kentridge's chalk and charcoal images and Sony's music join forces with the uncanny manipulations of the Handspring Puppet Company in Ubu and the Truth Commission, a play written by Jane Taylor, there is once again an inevitable emphasis on the volatile duality, duplicity even, of technologies of electronic recording and transmission. This time it falls on the simultaneous translators employed by the Truth and Reconciliation Commission at its public hearings, who rendered the words of witnesses for those who speak other tongues (the South African constitution recognizes eleven official languages). While an actor playing the interpreter occupies a closed Plexiglas booth, the wooden puppets representing witnesses disclose ambiguity and equivocality - a voicing of testimony but also the possibility of mistranslation and therefore of ventriloquism-of semic and thus of wider cultural violence, which may, against the best will in the world, compound the violations to which a witness testifies. From the film, the music, and the play with its puppetry we perceive how an inauguration of voice may also be an inauguration or repetition of violence. It is now more than ten years since the Truth Commission held its first hearings, and the responses to it that persistently resonate for me are the work of Kentridge and his collaborators-and, of course, that of the poet Antjie Krog, whose searing and luminous Country of My Skull (1998) showed what could be done with words, as it retraced the part she played in the broadcasting of the hearings over South African radio. With them I humbly declare an affinity. Without the operation of the telecommunica-tive network to which their work attests, and in which Krog was a material participant, my book could never have been written. In that sense it is a testing of the wager entered into by the Truth Commission - that the transmission of words, the relay of a witness's voice across distance, awaiting a response, would do: something. [...]

This is an extract from Ambiguities of witnessing - Law and literature in the time of a truth commission, by Mark Sanders.

The complex relationship between law and literature in testimony to crimes before South Africa's Truth and Reconciliation Commission.