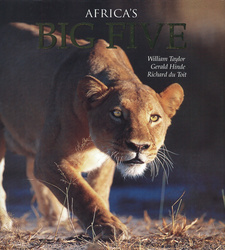 The most renowned mammals of Africa - the 'Big Five' - are the subject matter of this book. Will Taylor, Gerald Hinde and Richard du Toit have combined their rich talents as photographers, writers, storytellers and observers of the natural world to produce a magnificent tribute to Africa's premier wildlife species.

This book contains superb photographs which capture the essence of the subject species, and also places them specifically in their chosen habitats, in the southern African savanna environment. The images are varied, detailed and informative. Every picture tells its own story and conveys some of the magic of this continent, rich in wildlife and fortunately still rich in wild places. Most of these are national parks or game reserves - as much of the continent, like the rest of the world, has been overtaken by development and progress. The five sections of the book give an enormous amount of scientifically accurate detail about the animals described, but couched in an absorbing and reader-friendly text. The salient biological data for all species is given in a most informative way, as well as a mass of anecdotal observations accumulated by the authors during their years in the bush. Many of the myths and legends linked to the Big Five as hunters of man, and as the quarry of man, are explained and unravelled. This book is a testament to the wildlife of Africa, in all its varied richness. While highly selective this material highlights one of the building blocks of the African renaissance - the diversity of wildlife of this continent. This diversity is not only an inspiration to the literature and folk lore of Africa, but also a significant economic asset as the cornerstone of the tourist attractions of this great continent. If the multitudes of animals that live in Africa's staggering array of habitats, none capture the imagination of man more than the five species that have come to be known as the 'Big Five'. Lion, leopard, elephant, rhinoceros and buffalo have all entrenched their place in the psyche of man through centuries of co-existence and competition. The cats certainly evoke emotions that come leaping back at us through millions of years of genetic memory. Their ancestors stalked our predecessors on the African savanna from the beginning of time. They are the original bogeyman, ruling the night as terrified groups of early man took shelter around fires in caves or rock overhangs. Emerging unseen from the night, like the stuff of nightmares, these animals preyed on early humans at will, dragging their victims back into the gloom. As man became socially and technologically more competent, he began to dominate the cats during the day; but even now in the wild places of the continent the night belongs to them.

These centuries of fear still exist under the seemingly unperturbed surface of modern man. Even today when the pale, bottomless eyes of the predator fix on yours, this gaze reaches deep into you, tugging at the soul of the caveman, stripping away the veneer of civilization and dominance, and leaving you momentarily in a primal state - frail and exposed to this ancient, powerful enemy. That is the basis of our fascination with the cats; but respect has grown from that initial fear. We now appreciate their grace and beauty and are entranced by the way they are the dominant predators of their world. The other members of the Big Five, although not hunters of man, were always important animals in magic and ritual. Cave art and rock paintings are evidence of their prominence in the minds of our ancestors. And it is likely that the sheer size and majesty of the elephant, the strange form of the rhinoceros, and the fertility suggested by the huge herds of buffalo earned them their place in the developing mind of the early savanna wanderer. [...]

This is an excerpt from the book: Africas Big Five, by Gerald Hinde, Richard du Toit and William Taylor.

The authors of Africa's Big Five present experiences and insights they have gained through years of close observation.

Creatures of Habit explaines the habit of Africa animals and helps to understand their behaviour.

Catching the Moment: Photographing Wildlife In a Timeless Wilderness

In Catching the Moment: Photographing Wildlife In a Timeless Wilderness, the photographers share a wealth of advice and useful information on how they captured the images in Botswana.

The Waterberg. The Natural Splendours and the People

This wonderful illustraded book unlocks the secrets to the soul of the Waterberg in South Africa.