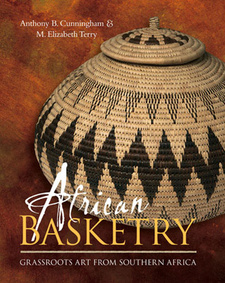 African Basketry is a unique contribution to African Grassroots art and culture. More than any other African craft, Anthony B. Cunningham and Elizabeth Terry's book represents the finest blend of indigenous culture, environment and technology.

In contrast to almost a century of documentation of North American Indian basketry, no comprehensive book has been published on basketry in southern Africa. For basket collectors, this has meant importing so-called 'traditional' African basketry, with little background knowledge of origins, historical context, use, or the raw materials used in their crafting, which range from plant fibre to coloured telephone wire. African Basketry documents the diversity of baskets produced in Angola, Botswana, Lesotho, Mozambique, Namibia, South Africa, Swaziland, Zambia and Zimbabwe. Although southern Africa is conventionally limited to the region south of the rough cross-continental line formed by the Kunene, Kavango and Zambezi rivers, this book also includes baskets made in the mid-Zambezi area of western Zambia, northern Mozambique, and part of south-eastern Angola. Southern Africa is well known for its remarkably rich plant diversity. Less widely known is the range of landscapes, lifestyles and languages that occur in the region, which provide a crucial background to this book. Chapter 1 highlights the need to set basketry in the environmental and cultural contexts in which it is made. This chapter also emphasises the point that all cultures ar£ dynamic, and notes the increasing speed of cultural and environmental change that impacts on people's lives, including their basket making. Chapter 2 places basketry in a historical perspective and considers how southern African basketry has been shaped by social, environmental and economic factors. Most craft items from Africa assume the label 'traditional'. However, basketry, like other art-forms, is a dynamic craft altered by cultural changes. To avoid any misunderstanding of the word 'traditional', we have used the term 'traditional basketry' to refer to baskets from the period 1850 to 1960, when baskets were far less affected by commercialisation. Specific examples from this era have been illustrated with black-and-white photographs taken by Alfred Duggan-Cronin, from the collection of his work at the McGregor Museum in Kimberley, South Africa, and photographs of museum collection pieces from various museums in southern Africa, the United States and Britain. These museums include the Iziko Museums of Cape Town, the Botswana National Museum and Art Gallery, the National Museum of Namibia, the National Gallery of Zimbabwe, Bulawayo Art Gallery, the Smithsonian Institute's Museum of Natural History, the Chicago Field Museum of Natural History, the Seattle Art Museum, and the British Museum of Mankind. In Chapter 3 we describe the weaving equipment used in the region, and explain how weavers work and acquire their skills, techniques, and design knowledge. This chapter also deals with basketry construction and design, and provides a general overview of basketry construction methods, including the main weaving types (coiling, twining, plaiting, twilling and twine making). Interesting starting and finishing methods, and designs created with weaving techniques and decorative stitches are also described and illustrated. Chapter 4 describes the nine major categories of traditional basketry produced in the region in terms of their social context. The categories include baskets used for winnowing and sifting, storage, collecting and carrying, beer production and as milk containers, mats, trapping fish, adornment, traditional architecture, and baskets that have particular symbolic uses.This chapter is illustrated with field photographs of baskets in use and black-and-white photographs of museum collection pieces. Chapter 5 illustrates and gives a detailed synthesis of the fibres and dyes used in southern African basketry. Fine basketry skills and the development of a strong basketry tradition are not uniform throughout southern Africa, but Mbunda, siLozi, seYei, thiMbukusu, Tonga and isiZulu-speaking basket makers are renowned for their work. Highly specialised and localised uses characterising baskets from particular areas are covered, as well as popular plants that are widely used throughout the region. This chapter also describes over-utilisation and the impact this has had on some of the natural resources and on the basket-makers' lives. Since the 1970s, commercial marketing and an increase in tourism have had a tremendous impact on the woven crafts of southern Africa. Chapter 6 describes changes that have taken place in basketry colours and materials with commercialisation, such as the use of plastic, wire, ink, and carbon-paper dyes. Commercialisation has also affected basket styles and designs, with 'traditional' forms often adjusted to fit the needs of'western' homes. Designs have become increasingly elaborate and more colourful, transforming baskets from utilitarian pieces into works of art. The most interesting examples of this change are illustrated with a series of colour photographs depicting baskets dating from pre-1960 through to the twenty-first century. Have basket makers benefited from commercial basketry production? The majority of basket makers remain subsistence agri-culturalists, but, for many weavers, the income earned from the commercial production and sale of baskets is their primary, and sometimes only, source of cash income. Chapter 7 discusses how benefits derived from the commercialisation of basket making affects people's livelihoods, and includes examples of economic and social benefits for specific basket-producing communities. The final chapter of this book looks to the future. We take the view that, in order for the basketry industry of southern Africa to survive and flourish, clear steps need to be taken in terms of resource management, product quality, and raising the awareness of buyers and collectors.

This is an excerpt from the book: African Basketry. Grassroots Art from Southern Africa, by Anthony B. Cunningham and Elizabeth Terry.

Both an grassroots art and a craft, Southern African basketry represents the finest blend of indigenous culture, environment and technology.

Ardmore. We Are Because of Others

Ardmore: We Are Because of Others tells the extraordinary story of this famous artwork studio in South Africa.

The abundant herds. A celebration of the Nguni cattle of the Zulu people

The aim of "The abundant herds - A celebration of the Nguni cattle of the Zulu people" is to record a part of this unique South African heritage for posterity.