Advocay in Action: A guide to influencing decision-making in Namibia, by Dianne Hubbard, Delia Ramsbotham and Nicky Marais. 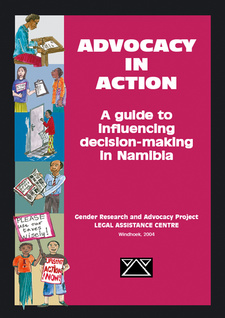 Advocay in Action: A guide to influencing decision-making in Namibia, by Dianne Hubbard, Delia Ramsbotham and Nicky Marais is intended primarily for civil society, but the publishers say it will also be of interest to office-bearers at the local, regional, and national levels in Namibia.

What is advocacy? Advocacy is an effort to influence a law, a policy or some other decision. Advocacy can be directed at various levels of government, government bodies, or other institutions or individuals. For example, you could use advocacy to convince Parliament to pass a law on children's rights. You could use advocacy to persuade your regional council to provide better services for the elderly. You could use advocacy to pressure your local authority to take steps against illegal shebeens. You could use advocacy to lobby your local clinic to stay open in the evenings, or to convince your school to introduce a new extra-mural activity. You could use advocacy to affect a decision by a government body such as the Social Security Commission or a Communal Land Board. You could use advocacy skills to influence decisions by private organisations or individuals as well. For example, you might try to convince your church to play a more active role in speaking out on HIV. You might want to convince your employer to offer a better medical aid plan. You might want to persuade your traditional leader to involve more women in community decision-making. Namibia is a democracy. In a democracy citizens have a right to participate in the political process. No democracy can be strong without good citizen participation. The simplest way that citizens can participate is by voting in elections. Citizens 18 years of age and older are allowed to vote for representatives at many levels of government - local authorities, regional authorities, the National Assembly and the President. The right to vote in Namibia is guaranteed by the Constitution. But participation is more than just voting. Citizens have the right to have their voices and concerns heard by the government. Citizens are encouraged to share their opinions in ways other than voting. Every person in Namibia has the right to influence government decisions. The right to participate in all levels of decision-making is guaranteed by the Constitution. Advocacy aimed at influencing a specific government decision is sometimes called "lobbying". A democracy is a system of government where supreme political power rests with the citizens of the country. [...]

This is an excerpt from the book: Advocay in Action: A guide to influencing decision-making in Namibia, by Dianne Hubbard, Delia Ramsbotham and Nicky Marais.

Advocay in Action: A guide to influencing decision-making in Namibia

Advocay in Action is aimed primarily at NGOs and grassroots-based groups and a guide to influencing decision-making in Namibia.

So Cry the Abused Mother and Child

Poetry on Violence Against Woman and Children, illustrated by Namibian secondary-school students

19 essays seek to unravel the misconceptions surrounding the concepts of gender equality, sexuality and sexual rights in Namibia

Challenging the Namibian perception of Sexuality

Mirror, Lens and Window: A Workbook on Journaling for Namibian Teachers in Training

Mirror, Lens and Window: A Workbook on Journaling for Namibian Teachers in Training arises from a sponsorship with Basler Afrika Bibliographien.